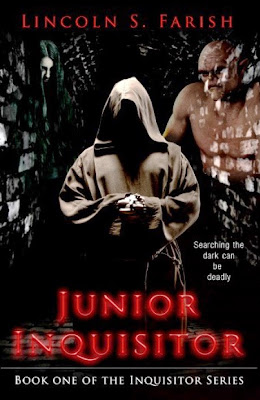 From time to time I like to open my blog up to guest authors with upcoming books that I've taken a look at and gone "Damn! Why didn't I think of that?" err, I meant "That looks like a fine read."

As such, I'm pleased to have with me today Lincoln S. Farish, author of the upcoming dark fantasy:

He's here to whet our appetites a little for what looks to be a bloody fun read...emphasis on the bloody part. Check out the blurb below and tell me that doesn't make your mouth water just a little bit.


Brother Sebastian is halfway up a mountain in Vermont, hell-bent on interrogating an old woman in a shack, when he gets the order to abandon his quest for personal vengeance. He has to find a missing Inquisitor, or, more likely, his remains. He’s reluctant, to say the least.

Not only will he have to stop chasing the best potential lead he’s had in years, this job—his first solo mission—will mean setting foot in the grubby black hole of Providence, Rhode Island. And, somehow, it only gets worse…

If he’d known he would end up ass deep in witches, werewolves, and ogres, and that this mission would jeopardize not only his sanity but also his immortal soul, he never would’ve answered the damn phone.

When did you start writing?

On this series I started about ten years ago. I'm not sure if I will ever use it, it is a kind of Origins story. But once I wrote it I was kinda hooked, I realized there were many many more stories about Sebastian that needed to get out. I wasn't in a hurry, and I took my time, hence the slow pace. Since then I am almost finished with my fourth novel in the series.  It's funny I wrote my first book long before I'd ever heard of any of the other authors that write along similar lines. The first time I read Larry Correia,  Junior Inquisitor was with my editor. I wish I'd read him earlier, his creation of a useful silver bullet is better than mine.

I was really stuck trying to shoe-horn in my story into a genre, because it just didn't quite fit. I'm not trying to scare anyone, act as a warning to the populace at large on the dangers of Cthulhu, or teach a moral lesson like horror usually does. At the same time if you have a group of people who have powers that can and usually do harm regular people, your story is not going to be a happy one. Bad things will occur, people will die, and mayhem will run rampant. It's not dystopic, for most people magic never enters their lives and they go about quite happily unaware it actually exists. Those that do, however, experience all kinds of terrible events and traumas. Set more or less today that kinda makes it urban fiction, minus the romance. So dark urban fiction almost horror.

What research did you have to do?

Quite a bit on Providence, it's been a long time since I've been there. And lest anyone think I hate Providence, I do not. I just needed a decent sized town for creatures of madness and mayhem to run around in. I could have picked Worcester, New Bedford, even Hartford. I went with Providence. I also spent time learning about the different orders of monks, so that part of the story would be authentic. On weapons I had a lot less research to do since I've used weapons ever since high school and quite a bit through out my twenty-eight years in the military. I've been over to Iraq twice, Afghanistan, three times for the military, and spent about a year in Afghanistan working for a private security firm. Every bit of equipment the Inquisitors use I have experience with, the same with their tactics, which made it easy to describe but boring to read. Most of the time when there is a fight people focus on what is right in-front of them. To give a story any kind of continuity and avoid “Well  if you remember Bob,” or “Tell me again what happened when the Ogre attacked,” dialogue I had to expand Brother Sebastian's peripheral awareness. At the same time I didn't want to descend into omnipotence, so it was a balancing act.

So tell us a little about the magicians in your world  All evil S.O.B.s or any heroes like, say, the Harrys (Dresden or Potter)?

Those are differently worlds with different rules. Jim Butcher has within his series, The White Council and the Laws of Magic to reign in true evil. That kinda sorta works for Harry Dresden, but that does leave a lot of room for abuse as Harry's mother pointed out. If you notice in Harry Potter, Arthur Weasly, as nice as he is written, makes remarks about how clever Muggles are for inventing things like electricity and phones because they don't have magic. Like they're an occasionally bright child, there is a kind bigotry of low expectations. This is shown pretty clearly when the Minister of Magic visits the Prime Minister, and of course how Dolores Umbridge acts towards non-humans. There is some real nastiness in the margins of Harry Potter's world, and I think the stories are better for it. The other difference is in both of those worlds, one is born into magic or not, and they grow into their power, no one reads a strange book and has magic unleashed upon them as in my world.

I took, I think, a harder, and more realistic approach as to what would happen if there was magic. It's power. People rarely handle power well, especially if they get it suddenly. A decent comparison is when people win the lottery. They tend to go a bit crazy with all of the new possibilities open to them now they are a millionaire.

Imagine you had the power, magically, and from across the room, to slap someone who was rude, maybe they're yammering away on their cell-phone in public, perhaps they're driving like a jerk, maybe talking during the movie, cutting in line, whatever. Now if you could do that, and no one would know that it was you doing the slapping, and there was no way you'd be punished by the law for doing so, would you be tempted?

Now toss in some evil entities encouraging you to do more than just slap around people who get in your way and you have a real monster being created.

Some heavy stuff there. So where do you go from this book?

The Soulless Monk, the next in the series is with my exceptional editor Danielle Fine and I am finishing up The Witch's Lair now. With luck that will happen in the next week or so.

When are they coming out?

Not sure. Should be later this year, but I'm sure The Soulless Monk will be out by fall, if not sooner, but there are lots of factors like re-write time, outside influences like the wife and helper dog and their willingness to put up with my antics that will have an impact on timing. A big one is, obviously, how many copies and how quickly they are sold of Junior Inquisitor. From those sales I'll be paying my editor, to work on the other two. I'm hoping to sell a lot as she gets real cranky when it comes to her money, and she does such a good job it feels wrong to try and pay her in kindness and with my good looks.


Please join me in thanking Lincoln for introducing us to his dark twisted world!  Junior Inquisitor comes out on March 1st 2015 and is currently available for pre-order at: 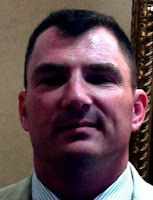 Called an adventurer and quite possibly insane, Lincoln has traveled to many continents and countries on his own and at his country’s behest to determine from whence the darkness comes. Despite persistent rumors, Lincoln maintains that he had nothing to do with the tiger, was not involved in illicit wiener dog races, and has never used his knowledge of genetics to create a better life form. He lives in Virginia with a very patient wife, a Godzilla level engine of destruction named Veronica, and a helper dog named Calvin.

This author sounds smart and witty. I can't wait for this book to come out! On a side note, I've been imagining I had the power to slap people all day! It's a power I wish I had over a guy I deployed with on my very own Afghan adventure... Winky face

Wow... I totally agree with Michael. It's impressive that Mr. Farish already has this series developed. Considering he sounds like one of those crazy guys that rides horses into combat, I am surprised that he chose Providence for the setting of this novel, rather than somewhere in the 'Stans!

"Godzilla level engine of destruction"??? don't care how patient his wife is, regardless of its validity, I sense pain in his future.

A lot of intriguing elements presented here. Sounds like one heck of a story. Good luck with the book, Lincoln.

Rick, thanks for the interesting interview. I've added myself to your blog followers as well.

dear,
friends
There are many key points to remember when making the right choice for your Branson web designer. These apply to all businesses who are currently seeking a web designer for their new project.
see more details:Providence web design

dear,
friends
There are many key points to remember when making the right choice for your Branson web designer. These apply to all businesses who are currently seeking a web designer for their new project.
see more details:New Bedford Web Design