I'm pleased to announce that LYCAN MOON, a new dark fantasy adventure by yours truly and Ruby Cruz, is almost here!

Coming Aug 11th. Available for Pre-Order from Amazon.com now. Check out a small sample chapter below....

Rowan Sinclair has trained for a life in the shadows. As a member of the Guild, she's vowed to mercilessly hunt werewolves or die trying. But when one approaches her, claiming to know her missing father's fate, she decides to do the unthinkable - work with one of the very monsters she’s sworn to destroy.

Dean Mason is a man living with a curse, doing whatever he can to keep the beast inside from sating its bloodlust under the light of the full moon. When a chance meeting offers a tantalizing glimpse of a potential cure, he’ll do anything to end the nightmare.

Now destiny has united these two predators, each possessing the key to something the other desperately needs. Their partnership will lead to either their salvation or mutual destruction in this urban fairy tale where there's no such thing as happily ever after. 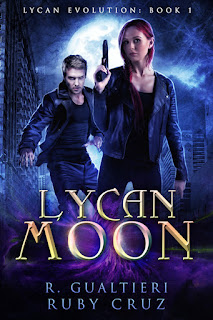 Ro stopped moving as she heard what sounded like multiple soft footsteps padding through the underbrush. As she ceased her movement, so did they, mirroring her. She’d been right. These wolves seemed much smarter than the average packs she and her father had hunted in the past.

“Hello?” she called out timidly. “Is anybody there?” She almost had to stifle a chuckle at the horror movie cliché.

Before entering the park, she’d purloined an oversized coat and hat from a nearby Goodwill box. She figured her best bet for blending in would be to either appear as a jogger out for a late night run or as a homeless person in the wrong place at the wrong time. She’d decided on the latter, as it made her appear weaker, not to mention offered plenty of camouflage for her weaponry.

Though she had her tracker on her, she didn’t dare look at it. To do so now would give away that she was more than she appeared. Besides, with her senses on edge as they were, she didn’t need it.

She took a step, then another, when the hairs on the back of her neck stood up straight and a corresponding spike of adrenaline hit her brain.

Ro sidestepped, more out of instinct than having heard the actual attack. The wolf was both smart and fast. Had she been anything less than she was, it would have taken her and carried her off into the bushes before she’d even had a chance to scream.

Pity for it that, smart as it was, luck wasn’t on its side this night.

She spun as it leapt at the spot she’d been a mere moment before and brought her fist up, slamming it into the back of the beast’s thick skull. Normally such a blow would be laughable in the face of a monster wolf, but she’d used its momentum against it. Off balance as it was, her hit sent it staggering to its knees as it tried to cease its own forward motion.

Ro jumped on its back, simultaneously drawing her knife. She was sticking to her personal promise. Besides, it was too soon for the gun. She could sense this wolf wasn’t alone. Though double-tapping it in the back of the head with nine millimeters of silver was by far the safer course of action, she didn’t want to prematurely scare off the pack-mate she was certain was close by. She wanted it to think this was a fluke – that she’d gotten lucky.

After everything she’d gone through the past few weeks, one kill was not going to suffice for this moon.

Before the first wolf could regain its feet, she slammed the weapon into the base of its skull. Despite the toughness of its skin, the silvered blade sank into it like a hot knife through butter. With a quick twist of the grip, she severed its spinal cord, killing it instantly.

It hadn’t even had time to whimper.

Ro pulled out the blade and palmed it, drawing it into the oversized sleeve of the coat. She backed away from the downed wolf and started trembling. Though she knew it was likely that whatever else was out here with her wouldn’t be taken in by the ruse, she had to try. If another wolf was close by and truly in the grip of its beast form, it might not possess the higher brain functions to put two and two together.

She didn’t think that likely, though. Everything she knew about these Los Colmillos wolves told her they weren’t animals, at least not in their thinking. The first one had been sloppy, overconfident, but there was little chance of another being so reckless in the face of the obvious – that she was still standing while its pack-mate lay dead on the path.

Still, Ro kept up the illusion. She backed away from the monster, staring at it wide-eyed, a feigned look of horror upon her face as if she was too terrified to even scream.

Several moments passed when suddenly the hairs on her neck stood up again and she sensed movement from ahead.

That’s it. Come to mama.

She’d purposely backed herself up against a rocky outcropping. It served to protect her backside, even if it boxed her in. That was fine, however. She had no intention of running.

The wolf stepped from the brush on the opposite side of its dead companion. It was huge, considerably larger than the one she’d just dispatched.

She took a quick look at the dead wolf, taking note of its smaller size and lighter coloring. Probably a female. The one before her now was most definitely a male which, for some reason, made the coming fight even more exciting.

The beast lowered itself to all fours and approached the downed wolf slowly, its eyes never leaving her. Its stance suggested it was ready to spring into action at any moment. Ro stared back at it wide-eyed, as if in disbelief, but in actuality waiting for it to be in a position where she was unlikely to miss her shot.

Slowly, she reached down with her free hand and slid it beneath the hem of the coat to where her holster lay.

Just a little more, you son of a bitch.

The wolf nudged the other with its nose, as if checking to see if it were merely stunned.

Good luck with that.

Even as the male continued to sniff its companion, the dead wolf began to change. The hair retreated from its body. Its stature began to shorten, and its features began to take on a human-like form. Within moments, Ro’s instincts were confirmed as the body of a naked woman lay where the wolf had been a moment earlier.

The other beast lifted its head and bared its teeth at her.

“Come on,” she whispered. “Here I am. So tasty and helpless.”

Rather than charge her, though, the wolf looked around as if considering its options.

Damnit! “Not fooling you for a second, am I?” she asked aloud. “Fine. The hard way it is.”

Ro flung the coat off her, revealing her lithe form. In the same movement, she drew her gun. When the dead wolf had shrunk back to human size, it had greatly diminished the cover it provided its companion. She didn’t think she was going to get a clearer shot.

This wolf proved to be much smarter than its companion, however. It reared up to its full height and kicked out, sending the dead woman flying toward Ro just as she pulled the trigger.

Ro dove out of the way, her shot missing by a mile. She rolled and came up to her feet just as the wolf lunged for her. There was no hesitation from it as there had been that night with Dean. This one meant to have its pound of flesh.

That was fine by her. She likewise felt absolutely no sympathy in this fight, either for herself or the creature.

Only one of them would walk away from this.

There was no time to aim properly. She pulled the trigger as she sidestepped, catching a hairy elbow in her midsection, hard enough to almost knock the wind out of her.

She staggered and backpedaled, putting some distance between her and it. Clear shot or not, it was suicide to stay within arm’s reach of a monster like this.

As she did, she saw the creature stumble into the tree line. It put one of its paws over its thigh and let out a brief whimper. She’d winged it.

The male wolf turned toward her wide-eyed, the anger in its eyes replaced by a look of pain and, although she couldn’t be certain, she was convinced she saw fear, too.

It had just enough cover to potentially ruin her shot. She had to finish it off before it could bolt. If it ran, it was unlikely she’d be able to find it again before it could hole up somewhere.

“So, that other mutt?” she asked, hoping this thing was smart enough to understand her. “She your mate, or just your fuck puppy?”

Its eyes narrowed and its lips pulled back from its teeth.

Pride before a fall, motherfucker.

“Sorry to break it to you, Fido, but I’m pretty sure all dogs don’t go to heaven.”