It's part of the special #HoldOnToTheLight blog event (see the bottom of this post for details). 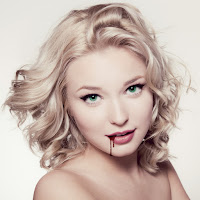 Some days I'm really not sure of who I am, what I should be doing, or how I should act. I don't let the others see it. It wouldn't be befitting a person of my so-called station. Weakness is not tolerated among our kind. Even a momentary crack in our veneer can leave us vulnerable to the predators who are constantly watching.

As for friends to confide in, those are few and far between. Even those few I trust ... I simply can't open up to. It isn't wise to confide in another vampire, not when the elders can force us to bare our very souls with but a few whispered words of compulsion.

A part of me isn't bothered by that - the person I became after years of servitude and abuse at the hands of Night Razor. No, she's too hard for that. She has a shell that is nearly impenetrable, a rough callous formed over her very soul from decades living in a world where life is cheap and remorse isn't tolerated.

The truth of the matter is, I hate who I've become, but at the same time I admire her strength. It's so unlike how I used to be, practically a different life. A foolish young girl named Lucinda Marie Carlsbad once used to lose herself in books and dream of a life in which she'd be respected, in which she'd stand as an equal to any man, and would rise to the top by virtue of hard work and her abilities.

Her father put an end to that, constantly berating her, reminding her of her place as a woman. She should dress pretty, learn to cook, do all the things that could land her a good husband. Only then would she have any worth, and only as an extension of whatever man decided to have her. There were never any fists or hands in those days. No, those came later ... after that little girl died and was reborn, but the shell she ... I ... would later wrap myself in had its beginnings in those days from the scars the constant browbeating left behind.

One could argue those words were the cause of what came next: running away, finding employment in a place that valued only my body, and then meeting the monster who would forever change my life. Little Lucinda died at his hands, but it wasn't an easy death. No. She lingered for years, holding on, refusing to give in, but dying a little bit at a time until she was no more.

Where my father's voice cut me on the inside, Night Razor's fists did their part on the outside and soon I began to think that perhaps my father was right - I had only found my true worth at the hands of the man who would have me. It just so happened that man was an immortal monster with hands so bloody they could never come clean.

That's when Sally was born. All of those years, all of those scars, they added up over time. Little did Night Razor know, though, but the woman he molded in his own image as as if from clay would take his lessons to heart and become his downfall.

I thought then and there that I had achieved parity with my life. My scars were still present - they always would be - but they were buried deep, almost forgotten. And now my tormentor was dead and I had everything I could ever ask for.

The kindness of one man, someone who dared to be my friend despite everything I did and said to him, began to awaken little Lucinda again. It turns out she wasn't as dead as I had thought. That shell I had built around her hadn't been a tomb after all, merely a cocoon for her to sleep until it was time to awaken. Sally, however, is still the driving part of me and I'm not sure I want her to leave. She's strong, sure in herself, allowing herself to bend, but never breaking.

But, where Sally is cynical, Lucinda sees hope. For the first time in decades, she can envision a future that isn't littered with bodies, where the slightest disobedience is not met with cruel punishment, and where my fate is her own.

Perhaps one day soon it will be time for these two disparate ladies to meet in the recesses of my mind and have a good long chat. Perhaps they can discuss the future and whether they can coexist together: strength and hope, existing as one being.

It might be too much to ask for, but I'm willing to try.


About the campaign:
#HoldOnToTheLight is a blog campaign encompassing blog posts by fantasy and science fiction authors around the world in an effort to raise awareness around treatment for depression, suicide prevention, domestic violence intervention, PTSD initiatives, bullying prevention and other mental health-related issues. We believe fandom should be supportive, welcoming and inclusive, in the long tradition of fandom taking care of its own. We encourage readers and fans to seek the help they or their loved ones need without shame or embarrassment.

Please consider donating to or volunteering for organizations dedicated to treatment and prevention such as: American Foundation for Suicide Prevention, Home for the Warriors (PTSD), National Alliance on Mental Illness (NAMI), Canadian Mental Health Association, MIND (UK), SANE (UK), BeyondBlue (Australia), To Write Love On Her Arms and the National Suicide Prevention Hotline.

To find out more about #HoldOnToTheLight, find a list of participating authors and blog posts, or reach a media contact, go to The Hold On To The Light Facebook Group.