HALF A PRAYER (The Tome of Bill, part 6) is here 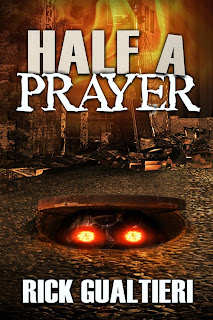 Getting there is indeed half the fun, but it can likewise be tiring as all hell. Regardless, I am pleased to announce the release of

When last we left Bill Ryder and his friends, their lives had gotten a wee bit more difficult. Sadly, that was just the tip of the iceberg.  The world is hanging on the brink of annihilation and a few folks are ever so ticked at Bill for his role in things.

But enough of my yammering.  See for yourself in the below teaser...

"Fucked beyond all possible measure of the fuckery scale? I'd say so."

The crowd began to murmur amongst itself, no doubt commenting on our obvious discomfort. I couldn't bring myself to turn my head away from the Draculas, but I picked up bits and pieces of it anyway thanks to my superb vampire hearing.

"See how guilty they look?"

"Five bars of gold says they kill the abomination first."

"They should strip the blonde one. She is one fine slice of gorvu."

I was tempted to scan the crowd for the owner of that last one. There's always gotta be at least one perv among the bunch. Asshole. That was my job.

Before I could turn my head away, though, Alex's mismatched eyes met mine. I expected to find fury radiating from them, enough to scorch me where I stood. Instead, he grinned and inclined his head ever so slightly. That motherfucker was one seriously weird dude.

I tore my gaze away and looked over the rest of the bunch. Each of them was dressed in regal finery, obviously befitting their station, but wearing fashions and colors which I assumed to be of their own respective preference. To Alex's immediate left and right sat Theodora and Yehoshua, respectively. I recognized them, and not just because Thea was probably the hottie the wicked stepmother in every fairytale was modeled after.

They'd been the ones who ultimately had let me go back in Europe, confiding in me that they weren't all that pleased with either Alexander's rule or his plans for decimating the world. Yehoshua wore a neutral expression. He might as well have been sitting down to watch a particularly dull game of golf. Theodora was far less collected. The look on her face was one of utter loathing. At first, I thought it might have been toward the crowd in general, but every so often, her eyes would flicker in Alex's direction.

With the exception of James, the rest of the Dracs were all new to me. I counted three other women amongst their number and six men, all of various lineages. Interestingly enough, none of them seemed to fit any stereotypes of what I might have imagined a vampire ruling counsel to be. There were no obvious Mayan high priests, Spanish conquistadors, or Roman consuls sitting there, looking like they'd stepped out of a time warp. Hell, most of them looked like you could pass them on the street without giving a second glance.

I wasn't fooled, however. Each and every one of them possessed several times the power needed to pulverize a vampire newb like me into a puddle of Bill-flavored goo.

For all I knew, the only one who lacked the inclination to do so was James and he was...what the fuck?

He sat at the last chair to Alex's right, dressed as regally as the others, but there was something very much off about him. Normally, James was bright-eyed and very full of life for a man who was over six hundred years in age. It wasn't unusual to find a wry grin upon his face. Not so today. The best I could say was he looked haunted. Sadly, I couldn't glean any further insight as he refused to look my way.

"What happened to his arm?" Sally whispered under her breath. She was just barely audible to me, but I didn't fool myself into believing that some of the others present hadn't picked it up too.

Regardless, I had no answer for her. His left hand rested upon his knee, but the right sleeve of his suit jacket was pinned to his side. It was the same arm he'd lost in battle to Vehron. That made no sense, though. It had already started growing back when last we'd seen him. It should have been fully regrown by the time he'd reached whatever destination Colin had spirited him off to after the fight.

Whatever was going on, it wasn't good. James was typically our lifeline; a guy strong, smart, and influential enough to pull our asses out of whatever shithole we'd gotten ourselves stuck in. Things seemed to be different now. For all of his rank, he had the look of low man on the totem pole with this bunch. What the fuck had happened since he'd left us?

Sadly, I got the feeling we wouldn't get an answer to that anytime soon. One of the vampires guarding the inner circle in which we stood turned and stepped toward the Draculas. Judging from the way he carried himself and the crispness of his dress, it wasn't hard to guess he had some position of authority here - maybe a vampire general or something.

Words were exchanged, but thanks to the continued yammering of the crowd, they were lost upon me. The only thing I got out of it was the guard asking what sounded like a question.

Alex gave a single shake of his head, then inclined his gaze toward another door leading out. Who knows? Maybe he was having second thoughts and was gonna let us go.

Never let it be said I'm not an optimist at heart.


I hope that whets your appetite a bit. If so Half-a-Prayer is currently available for:

I checked out the Amazon reviews--not a bad showing there. Good luck with the series.

I see you live in NJ. My 3 daughters abandoned me here in sunny L.A. to move to NJ. I sure miss them, but I'm not going to complain--the move has done them well. And actually I kind of enjoy NJ when I'm there.

Honestly I'm starting to sour a bit on NJ, but maybe that's because I'm a lifelong resident. I hear too many stories about other people's property taxes and it makes me long for change.:)

Well, yeah, I've heard that property tax thing, but my girls seem to be managing that okay. From what I've heard they are far more outrageous than what I pay here in Los Angeles which is pretty surprising since everything here is usually pretty outrageous.