Raging Anger against The Legend of Korra 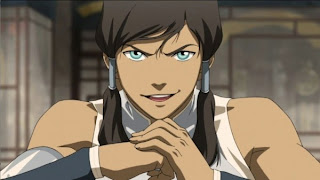 Well okay, more like very minor gripes, but I got you to click, didn't I? Oh yeah!

I make no secret that I was a big fan of Avatar: The Last Airbender. Hell, I kept watching it long after my kids abandoned it (they have no taste), eagerly awaiting each new book.  While there are some spectacularly bad episodes within the series, for the most part it's an awesome cartoon. Thus I was excited when I first heard about The Legend of Korra.

Now here's the thing, for the most part Korra lives up to her predecessor. It grew into an exciting show with likable characters and some fun plots. I was there with it right up through the end.  Now that it's over, though, and I find myself wondering if we'll ever visit the world of benders again in cartoon format (Nickelodean will almost certainly continue things in comic format...and if they don't, they're idiots), I find the Star Trek nerd in me coming to the forefront to whine about minor things that bugged me.

Closure from the old crew: I know what some of you will say, this was a new show about new characters. We should be thankful we got a shot of Katara in the opening episode, and for the most part I'd agree.  However, that wasn't the only mention we got of the past generation.  We got to see the grownup spirit of Aang, met up with Iroh in the spirit world, got some quality time with elderly Zuko and Toph. You know where I'm going with this.

Where the hell is Sokka!?  Sure we got a glimpse of him in one episode, and Katara hinted that he had died, but that was it.  No mention of him, whether he and Suki got married, whether he eventually hooked up with Toph (we learned who Lin's dad was, but not Suy's) or how he died?  Why did the lone non-bender of the original Team Avatar get no love? That dude was epic, yet for all we know one day he drank some more bad cactus juice and then wandered off into the Earth Kingdom, never to be seen again. Lame!

The new team excelled...at getting their asses kicked: Sure, the original Team Avatar didn't always win, but for the most part it was because the odds were stacked heavily against them.  The new Team Avatar...sorry, but those folks suck at the one thing they should be good at - fighting other benders. Hell, in a match between them all I might give Asami the edge and all she had was a taser glove.

Let's start off with Bolin and Mako. These two are former world-class professional benders, emphasis on world class. They went all the way to the championship.  You'd think these guys would steamroll over most folks who dared bend a drop of water in their direction. Not so.  Their fighting strategy seemed to consist of "Throw rocks or fire at our enemies and hope we get lucky?" More often than not, they didn't.  Think about it.  This is like Michael Jordan teaming up with Lawrence Taylor...and then getting their butts handed to them in high school pickup games across the country.

Korra wasn't much better, obviously having rejected her training to follow in the footsteps of these "masters".  Compare this to the original team.  All of them: Aang, Katara, Zuko, and Toph were smart fighters - using their environments to their advantage, often with devastating results.  Hell, elderly 80+ year old Toph pretty easily pimp-slapped Korra in their training matches. One got the impression that she could have singlehandedly stopped Kuvira in season 4 in between gumming her food and complaining about her back.

I liked Korra's friends, but if they were to ever travel into the past to before the end of the Hundred Year War, they'd get smoked...probably by Sokka alone.

Seriously, that was their plan with Baatar Jr???: Their city was being sacked, their forces destroyed, and people were dying left and right...yet Korra refused to beat the information out of Baatar Jr.  Instead relying on some lame strategy to threaten him with never seeing his girlfriend again.  Sure it worked, but it was only because Baatar Jr was a wuss.  In a show that often has not shied away from the horrors of war, this just seemed out of place.  Seriously, what would Korra have done if he'd said "Fine. Have fun with that" - throw her hands up and surrender. "Well, I've done all I can do."

The Ending: Oh relax.  I don't mean that ending. I thought that was cool (and I won't spoil it).  No, this gripe is for Verizon or Nickelodean - whoever was responsible for the show running a bit long and causing my DVR to crap out a minute before the real ending.  There I was, watching them walk toward the spirit portal and then...."Would you like to delete this recording?"  What?  That was it?  It was not until a few days later when I realized I needed to get my butt to Nick.com and watch those last few seconds.  Jeez!  Some days technology truly stinks.

The Ending part 2: No, I still don't mean that ending.  What I mean is that the whole series finale felt more like a mid-season ending.  Maybe it was the lack of a full, multi-season arc like the original show, but season 3's plot with Zahir felt a lot bigger.  The entirely of season 4 felt kind of like a minor subplot or epilogue to that.  Not cool.  Last Airbender's finale was epic.  One almost felt like they needed to smoke a cigarette when it was all over.  Korra...more like "Um, is there gonna be a season 5?  No?  Well, um, okay I guess."

Oh well, at least I  was able to get these off of my chest.  Now that I have, maybe I can move on with my life again.

ps: Old Zuko should have totally started dating old Katarra...that would have been cool too.
Posted by Rick G at 9:29 AM 1 comment: 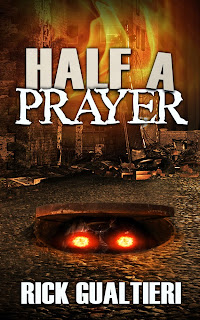 It's that time again...time for a cover, blurb, and teaser reveal. That means a new release can't be all that far behind.

HALF-A-PRAYER
The Tome of Bill, part6

Terror lurks below and it’s about to surface.

The end of the world is rapidly approaching, but Bill Ryder - gamer, geek, and legendary vampire - finds himself with more pressing matters to worry about: the women in his life. Sidelined from action, he’s forced to reevaluate his feelings. Sadly for him, it’s a luxury he can ill afford.

An unstoppable terror from the dawn of time has awoken deep beneath the Earth and is headed his way. To make matter worse, he’s been deemed a traitor by those he thought to be his allies. Now he finds himself fighting off enemies from all sides while warring with his emotions. Talk about sucky timing for introspection.

As the world crumbles to pieces around him, Bill must muster his courage, master his powers, and rise to the destiny he’s been trying so long to deny - because if he doesn’t, his love life will be the least of his worries..


"So what does it taste like?" Miranda asked as I took another swig from the canteen to shore up my enhanced abilities.

"Huh?" We'd taken a short break, and I'd stepped away from the group to recharge and double check we were still on the right path. I hadn't realized she'd followed me.

"The blood. I know you need it to survive, but do you actually like it?"

It had been rare for anyone outside of my roommates to ask that, and they'd mostly just made fun of me for it. Dave had inquired on a few occasions, but it was more in a clinical sort of way - like I was a lab rat.

"The truth is," I said, "it's hard to describe. Think of your favorite food."

"Oh, that's easy. There was this little roadside stand right outside of St. George that used to make these incredible fried brain sandwiches served with fresh okra. They were..."

"Whenever I could get out there."

"I know, and I still find that vile."

"You don't know what you're missing."

"And for that I am thankful." Ugh. My stomach churned at the very thought. I had figured nobody outside of that crazy Andrew Zimmern dude would stuff shit like that down their gullet. Man, people were just fucking weird. "Anyway, imagine that every single one of your senses was now attuned to...brain, I suppose, especially your taste buds. Think of how that sandwich would taste magnified a hundred-fold. That's pretty much how it is with blood."

"But even something that tastes that good doesn't explain why."

"Why some of you are such animals."

I chose to ignore the implied insult. "Actually, I think it does. If something is so insanely good, it's gonna be almost like a drug."

"So what you're saying is that you're all addicts?"

"I'm not ready to call myself a crackhead quite yet, although I've gotta have some rocks in my head to be in this place."

"About that, why are you down here? I'd heard the official story upstairs, that it was a rescue mission, but there's gotta be more to it."

I decided to hold my tongue on that just a human part. Ed was something else nowadays, something that had apparently not been seen before. Even so, at the end of the day, he was still my friend, and that was what counted. I voiced as much.

"Most vampires you've met wouldn't step across the street to help out a human?"

"I know what you mean. Of the vamps I've met, I'd say the vast majority of them have been total assholes."

"No, he's still an asshole," Sally called from where she and the others were checking their ammo.

Goddamned vampire super hearing. "Will you stop fucking eavesdropping?" I lowered my voice to a bare whisper and added, "Bitch."

"You were meant to," I snapped before turning back to Miranda. "Here's the deal. I've been a vamp for less than two years." Her eyes opened wide in surprise. "It's true. Before that...well, okay, during most of it too, Ed was my roommate. He and my other roommate, Tom, are my friends. I'd do anything for them."

"And they're not thralls?"

"Would I risk my ass to save a thrall?"

Miranda appeared to consider that. Finally, she nodded, satisfied with my answer. She glanced back toward the group where Sally was busy spray-painting a marker on the wall to note our passage, as she'd been doing every couple hundred yards since we'd started this journey. When it was time to bug out, chances were we wouldn't have the luxury of waiting for me to smell our way back to the surface. Finally, she stopped and put the can away in her pack.

It was time to move again.

Before we stepped to rejoin them, Miranda said, "Your friend is lucky to have you."

"Us," I corrected. "Sally didn't have to come along. This was her choice too."

"In his dreams," Sally replied from her position a couple of yards away.

I sneered in her direction. "Only the ones that take place near a free clinic."