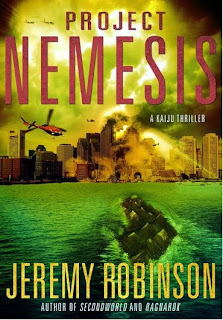 Been a while since I've done one of these. I'd say it's about time to play catch up a bit...

I don’t make it much of a secret that I’m absolutely in love with giant monster movies.  I've been waiting with barely contained enthusiasm for Legendary’s 2014 Godzilla film to open, hoping for the best yet dreading it might be another heart-breaker like the 1998 Tristar Godzilla.  I've had the Blu-ray of Pacific Rim for just a few weeks and have already watched it multiple times (despite having seen it in the theaters). Suffice it to say, I have seen every single Toho Kaiju movie - most of them several times.

Thus it was with great excitement that I was casually browsing my Amazon recommendations last week and saw Jeremy Robinson’s Project Nemesis appear in the list. This was a pleasant surprise in two ways.  One: obviously a novel about giant monsters smashing shit caused the ten year old kid in me to scream out in joy. Two was that I've read Robinson before and know him to be a skilled fantasy/adventure storyteller so I felt absolutely no trepidation when it came to hitting the purchase button.  I don’t mind taking a leap of faith, but I think it’s occasionally nice to forgo those first date jitters and hop in the car with someone you know can drive.

Project Nemesis is a fascinating read from several levels. The story itself is both unique while still being a loving homage to several Kaiju movies, perhaps the two that come most to mind being the original Godzilla and Frankenstein’s Revenge.  Another unique aspect is the perspective. Robinson alternately tells the story from a first person present perspective from the eyes of the main protagonist, Jon Hudson, to third person past for all of the other characters.  At first this was a little jarring as well as worrisome.  I’m not a fan of first person present, primarily because so few authors do it well.  I find it to be, more often than not, a painful experience.  Yet I was pleasantly surprised to find that Robinson makes it work.  I actually found myself enjoying switching back into Hudson’s eyes after reading what the monster or other characters were up to.  It doesn't hurt that Hudson is a flawed, but ultimately likeable fellow.

The story itself follows your basic sci-fi plot of an experiment gone horribly wrong - resulting in a rapidly growing monster, Nemesis, that’s horrifying yet sympathetic at the same time.  Hudson is at first scoffed at, but then by the time he's finally believed it's too late. The monster has grown too strong and the nation’s military...well, if you've ever seen a Godzilla movie you know how that ends.  The science is ultimately a bit goofy with references to DNA combination, aliens, and ancient gods, but that, too, serves as a loving nod to the genre from the old Ghidorah movies with their invaders from Planet X to newer fare such as Jurassic Park.

The only real downside to the entire experience is the human antagonist, General Gordon, who is given some backstory, but ultimately comes across as a cookie cutter military bad guy - Eeeevil for the sake of nothing more than being evil.  This is minor, though, because every time you meet Gordon you can be sure some violent action in on the horizon and that’s really what one is probably reading a book like this for: tons of city-stomping, gun fights, missiles, and big-ass monsters.  In that aspect, Robinson most certainly does not disappoint. 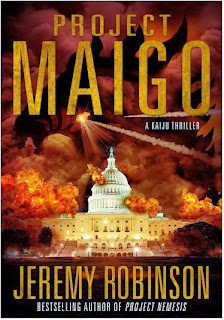 I had such fun reading this that I immediately bought the sequel, Project Maigo.

If Project Nemesis is Jeremy Robinson’s Godzilla, then Project Maigo is his Destroy All Monsters.  True monster movie fans will also recognize aspects of the original proposed story for GMK: Giant Monster All Out Attack here. It was considerably different than what was eventually filmed (in of itself an awesome monster movie) focusing on the drama of a monster with a human heart.  In true sequel fashion, we’ve gotten all the intros out of the way and jump right into the action - barely ever pausing for a breath.

The action in this one is even more fast and furious than in Project Nemesis.  How could it not?  There’s not one, but six monsters (possibly eight if you count some of the other characters) stomping about causing mayhem.  The  only difference here is that the scale is larger, but less emphasis is given to the human casualties.  Project Nemesis  was heavy on showing the aftermath of the monster’s attack - how real human lives were destroyed.  Project Maigo focuses instead on big explosions and leveled cities. This serves to make the overall tone a bit lighter, which will probably be more in line with those coming for the monster battles.  I can understand this as it once more follows the formula I laid out above. The original Godzilla put a heavy emphasis on the monster’s aftermath.  By the time we reached Destroy All Monsters, though, we just wanted to see shit blow up real good.  This book delivers on that in spades. If anything, I plowed through it even faster than the first.

In this book’s case the only downside is the inclusion of some secondary characters. Robinson has created a shared universe, similar to Stephen King's, and as such characters in one book exist in others. In this case we meet up with Hawkins and Lilly from another of Robinson's novels, Island 731.  Don't get me wrong, I will certainly be picking this novel up to learn about their fascinating back-story. At the same time, though, they don’t really work here. The character of Lilly in particular comes across as a bit of a Deus Ex Machina.  Once again it’s a minor thing, masked by some very nicely laid out action scenes, but their presence still feels a bit like an e-commerce website’s upsell - albeit, one that works as I mentioned above.

All in all I highly recommend both of these books. They make an excellent companion for a long weekend - serving as either the appetizer or dessert for the entree of a monster movie marathon.  If you've ever enjoyed Godzilla, Gamera, or Gorgo stomping across the screen, you would do well to pick up these books.