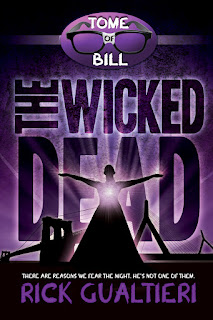 THE WICKED DEAD (The Tome of Bill 7) is coming.

I am pleased to share both the cover and the first teaser from this, the penultimate chapter in The Tome of Bill series.

The impending end of the world is weighing heavily upon Bill Ryder and things are looking worse than ever. His partner Sally has been mind-wiped. His friend Christy is on the verge of going postal. And his roommate Ed is seemingly on everyone's hit list.

And that's just the start of Bill's troubles. He's been tasked with the impossible - taking down Vehron The Destroyer, an ancient vampire so far out of his league that Bill is going to have to completely rewrite the playbook to have any hope of winning. And that's not even counting the scores of other enemies - both new and old - that he'll have to get through if he's to stand even one chance in Hell of surviving to see tomorrow.

Action, adventure, and a whole lot of snark awaits. Who says Armageddon can't be fun?


Roughly two hours later, I stepped out of the cab onto one of Newark’s main drags. The streetlights were still lit, which told me this place probably was hanging on pretty well. The ride hadn’t been too bad either – a little slow, and we’d had to take the long way as the bridges from Staten Island to Jersey were closed off. Fortunately, the roads were otherwise mostly clear. The world might be going to shit, but it was still in its early stages. We hadn’t yet reached a point where the highways were littered with cars full of people who’d decided to just pull over and die right there.

Don’t ask how much the whole thing cost. Let’s just say I was glad that nobody was stopping by these days to ask for a rent check. Thankfully, I had planned the trip in advance and had left home with a pocket full of bills – albeit probably not enough to get me home again. Oh well. I’d cross that proverbial bridge when I came to it.

My plan of action was simplicity itself: try Dave’s apartment and then, if that didn’t pan out, make my way to the hospital where he once worked as a resident. Dave was a smart guy, but a shitty doctor – at least when it came to bedside manner. However, the hospitals were doubtlessly overflowing with patients these days. They were also home to a generous supply of bagged blood. I was pinning my hopes especially on that latter. If so, maybe Dave was still responsible for saving lives and not taking them. It was a longshot, but in these crazy days hope was the one commodity that was still free.

I hiked several blocks toward my first destination – noting the rapidly deteriorating state of the neighborhood as I went. No wonder my cabbie hadn’t wanted to go any further.

Dave’s apartment complex wasn’t exactly in the upper crust section of the city to begin with, but it had previously been safe enough for a group of guys to gather for a weekly D&D game. Now, though, I could easily envision the rest of the group not so politely bowing out of the game. I saw burnt out buildings, graffiti proclaiming the end of the world, and bizarre scratches in the sides of some dwellings. All of it combined into a sense of being watched. If I hadn’t been an unholy creature of the night myself, I’d have said fuck it and found myself a nice, well-lit place to loiter until the sun came up.

But I was a vampire, more so, I was a Freewill – a special breed of vamp with powers above and beyond the rest of the rabble. Or at least I kept telling myself that as I struggled to maintain my new outlook on life. Let me just say, it’s one thing to stand in your own bathroom and proclaim you’re gonna face your fate head-on. It’s quite another when you’re walking through what looks to be the set of a fucking John Carpenter movie.

I thought back to my early days as a vampire – remembering how Sally had told me that appearance was ninety-nine percent of everything in the world of the unliving. If you acted like a victim, you’d be torn a new asshole. If you walked in like you owned the place, your chances of seeing the next sunset were much better.

Heh, the Sally living downstairs from me wasn’t so different from the one I’d first met, I mused as I turned down the block where Dave’s old apartment lay. I mean, weren’t they in the same boat, essentially getting to know me from scratch?

No, that wasn’t true. Despite Alex mucking with her brain, she was a different person from those days – a lot less likely to cause a bloodbath just because someone was walking too slow in front of her. Well, maybe not a lot. Either way, she had definitely changed. In some ways, it was hopeful because...

The thought scattered as something hit me from behind with the force of a small truck. Before I could open my mouth to cry out, I was airborne – flying across the parking lot leading to Dave’s place. The blow and subsequent landing – allowing me to experience the gentle tug of the scarred asphalt against my face as I skidded to a halt – would have been more than enough to stun most humans or worse. Pity for the asshole who blindsided me, I wasn’t a...

More like pity I wasn’t allowed to finish that thought. A pair of hands grabbed me roughly by the back of my jacket and hauled me to my feet. I was spun around and shoved into the wall of the building. Just then, the scent of vampire caught in my nostrils, something I should have noticed earlier rather than getting caught up in Sally daydreams.

“You’re more than thirty minutes late,” my attacker growled. “We get a free pizza and your life.”

Huh? The attack had caught me by surprise, but I was otherwise relatively unhurt. Whoever this asshole was, he was either a newb or didn’t realize who I was. It was going to cost him.

I looked up to see two more figures join the first. Though the darkness couldn’t conceal them from my eyes; they were all wearing masks.

They rushed forward and I took a wild swing at the nearest. My fist connected with a solid *clonk* of flesh meeting metal as I realized too late this one was actually wearing a medieval-style helmet – a pretty decent replica if my bruised hand was any indication.

Regardless, the blow got the job done. My attacker went down – a big-ass dent in the middle of his faceplate.

“Motherfucker!” a muffled voice cried from within.

Something about the cadence caught my attention and I hesitated for a second, allowing the other two to close the distance and attempt to pin me. The one on the right wore a green knit ski-mask, with Cthulu-esque tentacles hanging off the front. The other stared at me through the rubber face of a Cyberman. All the fight went out of me as I realized that I recognized their headgear.

No wonder the voice of Sir Dipshit had sounded so familiar.

I was being attacked by my own D&D group. Guess I’d missed more games than I realized.