Yo Joe. - a World's of Bill Fanfic Contest Entry

I am pleased to present to you the next entry in the World's Of Bill Fanfic Contest. 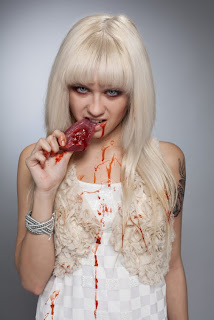 My name is Joe. Impressive name I know, with a name like that there are honestly only two jobs destined for me in life; mechanic is one, janitor is the other. I somehow broke the mold and wound up working as a patrolman in the 1st precinct of New York City. This area encompasses a single square mile, but that square mile is Soho and that is pretty much where this story goes to die, literally.

I was 28 at the time, and while not ripped, I was fit. After all, you occasionally have to chase down on foot a teenager who stole a 99 cent soda from a bodega. Those little fuckers can run. That, however, is neither here nor there. The whole point of this is that due to Gordon having his sixth kid and out on “paternity leave” as they call it, I was stuck working the night shift. Usually not a bad gig, but things had been kind of strange. There was an ominous feeling in the air, and there had been an unusual amount of homeless going missing.

I just finished the standard patrol, and parked in an alley with Michaels, Gordon’s partner -- fucking paternity leave -- and was busy chowing down on some greasy, grey hamburger when what felt like a dead body hit the roof of the cruiser. We got out and checked; I was mostly right. It was a body, just not exactly dead and not exactly human. Then again I did not specify which type of dead body, soooo… I suppose what happened next was mostly my fault.

It started to get up, and when it looked at Michaels, it felt like a vacuum sucked up my testicles so far up into my body I could swear I was gargling them. That right there is fear. So, not even realizing what I was doing, I had drawn my handgun and promptly emptied a solid clip into the center of it’s mass. Michaels after his initial shock followed suit.

We then proceeded to drag it off the roof and examined it, for what, I had no fucking idea, but in stressful situations you go through the motions. This stops you from thinking and gives you something to focus on. Turns out, the thing had a wallet and it was just some schmuck from Jersey by the name of Ted Green. At this point, every single bad movie and video game went through my head in what, I guess could, legitimately be called forethought. I turned to Michaels and pretty much tried to warn him as best as I could without legitimately coming off as a basket case.

“I’ve seen every bad science fiction and horror movie ever made, and this is the exact moment some cop or soldier or dumb blonde teenage heroine thinks they just took out the bad guy, only for it to hop up behind them and gut them like a fish. I honestly don’t know about you but I don’t want to die like a bitch.”

His eyebrow twitched probably on purpose, and then he nodded silently, we switched out our clips and proceeded to empty a full load into its face  -- heh full load-- its blood and brain smearing out in a fan shaped pattern in the alley. Sorry not it, Teds. Teds brains and blood. It was at that moment out of the corner of my eye that what is now the bane of my existence decided to canabalize Officer Michaels.

Sure, she was missing some skin and most of her dress and seemed to have lost an eye in a fight with something -- as you can guess the something was Ted -- but it is hard to ignore, even in that state, how fantastic Sally looked. As she continued to chow on Michaels she seemed to get better, and I am not afraid to admit I was simultaneously scared and kind of turned on.  Creepy, right?

I was not stupid, however, and tried to shoot her.

Okay, I take back the not stupid part because yeah, not a great idea.

I don’t remember what happened after she backhanded me across the face, but I’m sure you can guess the rest, especially seeing as how you are reading this after the fact. For some insane reason she took a shine to me, or maybe she just wanted a bitch boy, but what happened is I pretty much wound up being the janitor for a coven of vampires, you know lug out the stiffs and drop ‘em in the east river type of deal, a coven run by a homicidal psycho bitch from hell named Sally…

Ah, Sally...she's quite the little minx isn't she? Pity that Joe ain't gonna get the same treatment as Bill.  Oh well, that's what you get for not being the Freewill. Thank you so much your entry, Tim.

The contest is just about over...will any new stories sneak in just under the deadline?  I guess we'll see.
Posted by Rick G at 7:52 PM