Confessions of a Rich Douchebag 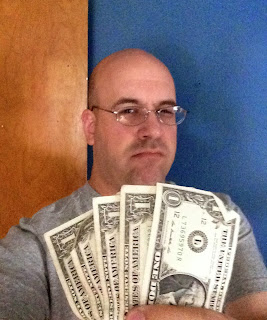 The past week has been an interesting one on the email front.  This isn't a bad thing. I love hearing from people - minus maybe scammers and bill collectors - but usually the most these various contacts have in common is "When is your next book coming out?" (which is a much more awesome question to hear than "When are you cutting off your fingers to spare us from another book?")

This week, though, I have gotten no less than three that started with some variation of "To whichever secretary or personal assistant gets this, please forward it on to Rick because..."  Add to that a fourth exchange in which someone mentioned that they were glad to hear I was a regular person and not some "rich douchebag" and I have to wonder if my email address has gotten mixed up with Donald Trump's again.

Each time it's been met with a bewildered "WTF?" from me, but then I realized this isn't all that different than similar such thoughts I've had in the past.  I've always been an avid reader, long before I ever dreamed of spewing forth my own words to paper.  Naturally, many of us are aware of the truly big sellers - the JK Rowlings, Stephen Kings, Tom Clancys, and James Pattersons of the world.  These are the folks that we turn on the TV and have a fair chance of seeing on a talk show, on the news, or a commercial. While we don't have access to their tax records, we can be fairly certain they're not exactly digging through the neighbor's trash for old cans of beans.

I likewise used to assume the same for many of the authors whose books I've picked up and read over the years. After all, if I found a book amongst the sea of others, that person must be pretty damn famous - sitting on a yacht drinking cognac from a crystal snifter while multitudes of hard-bodied models frolicked around them. Then, as I added more books to my resume, I began to become acquainted with some of these fine storytellers.  Don't get me wrong, some of them are doing pretty darn well indeed, but most are a long ways from snorting coke off a $10,000 hooker's ass. And that's where the fantasy begins to break down.

The thing is, just like any other profession, the big name superstars are few and far between. The vast majority are average Joes and Janes who are trying to make ends meat. The harsh reality is - and this goes double for anyone jumping into this fray looking for a quick score - it's very difficult to make a living as a writer. That illusion of authors taking Dom Perignon baths with supermodels is just that, an illusion (albeit a pretty damn cool one). As I said above, I can understand it too.  In the real world, though, many writers jump for joy if their work brings in enough to cover a trip to the grocer's each month.

Before you get the wrong idea, this isn't a sob story - no "poor me" here. I have been incredibly fortunate in my foray into this jungle.  My children may not be wearing $60,000 Air Jordans (and for that price you can be sure as hell those babies would be locked behind bulletproof glass), but they're not clad in potato sacks either. The awesome part is that many don't realize you don't need mega-millions for something to be life-changing. Going from, say, living paycheck to paycheck to being able to put even $50 in the bank at the end of each month makes a world of difference.

At the same time, while I am flattered that multiple (hopefully nubile) assistants are attributed to my operation, it's just me here - putting in a lot of hours at night so I can hopefully bring a smile to a few faces. I still hold a day job and this remains a part-time endeavor for me - albeit one that I am hopeful will some day be full time. In short, if you ever meet me on the street you can feel free to approach - sure in the knowledge that a legion of bodyguards isn't about to descend to beat you to a pulp.

Still, if the fantasy of me playing demolition derby with Bugati Veyrons while I burn $500 bills to keep my feet warm works for you, then by all means go for it.  I may not be a rich douchebag, but I certainly wouldn't mind being one some day...err sorta.

In the meantime, I shall continue to try my best to entertain. Now if you'll pardon me, I have some Grey Poupon to hand out at traffic lights...
Posted by Rick G at 4:25 PM

Could I borrow some lunch money? :P

Sure, I got a few quarters around here somewhere. :)