Picking Sides in a War of Giants

Within the publishing world the ongoing contract turmoil between Amazon and Hachette is well known. It’s caused quite a stir and has most definitely raised a lot of emotions on both sides.  Now before I go any further, let me just say I’m only talking about the two multinational giants in this fight.  My heart goes out to any authors caught in the crossfire who are seeing their livelihood suffer as a result.  My hope is that this gets resolved one way or the other quickly so we can all get back to competing based on the strength of our stories not on how much muscle either titan chooses to flex.

Recently, Salon.com published an article detailing why it was in the best interest of self-publishers to support Hachette. Personally, I found it to be a bit too condescending for my tastes and the logic behind this conclusion to be questionable at best.  However, it did stir up a lot of intelligent debate across the various forums I frequent. Even more so after I declared that I was on Amazon’s side in this.

Interestingly enough, this is a controversial choice even amongst self-publishers, but to me it makes perfect sense.  Hachette is a completely neutral entity to me.  They’ve neither harmed not helped me in any way.  On the other hand, I have seen great personal benefits working with Amazon over the past three years of my publishing career.  To that end, I wanted to dispute some of the arguments that I've seen presented in this. 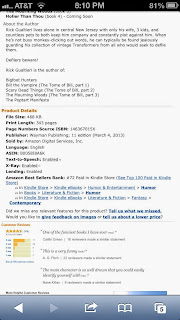 1: Amazon isn't your friend. They’re a corporate behemoth who cares nothing for you.
And Hachette isn’t?  Seriously, let’s not be silly here.  I liken this to job recruiters I’ve worked with.  I don’t fool myself into believing that any of them care about me beyond what dollar amount I represent.  However, some of them put forth a much better effort than others.  The truth of the matter is Amazon gives me access to great online marketing tools (Author Central), their customer service is top notch, they've given me a chance to reach their top 100 via offering Bill The Vampire as a Kindle Daily Deal, and whenever I've seen their booths at a convention the people manning it are always super friendly and enthusiastic toward authors.  All of that counts in my book.

2: If Amazon wins, they’ll drop royalties, kill the KDP program entirely, and/or start eating babies.
I am reminded of the phrase “If pigs had wings, they'd be eagles.”  I've stated on more than one occasion that I'm here for the long haul.  To do so, one must plan for the long term.  That includes keeping one's eyes open and tracking which way the wind is (or will be) blowing. What I won't do, though, is panic at every potential doomsday scenario.  I'll keep my options open, my eggs spread across multiple baskets, and adjust my plans accordingly. Right now the waters are fairly pleasant and my goal is to keep on the current path and avoid unnecessary freak-outs until such time as it makes sense to adjust course.

3: If Amazon wins you might find your sad little independent books next to $5 James Patterson offerings.
*Gasp* you mean I might have to...compete!? Say it isn’t so!  Here’s a little tidbit of information, I’m already competing. I take this job very seriously.  I don’t price my books the way I do as an apology for being independent - as my way of saying “I charge less money, so you shouldn't expect much.”  No. I price my books the way I do because I find it to be fair.  I don’t charge $9.99 or more for a single novel because frankly I don’t want to pay that much myself when I buy an ebook. I consider my current prices to be a fair trade-off of value for the customer vs. a royalty rate for myself that I’m quite happy with.

Should I wake up tomorrow to find myself competing on price with the big boys, then I shall do my best to compete. Assuming I’m not already there, I fully plan to keep challenging myself so that when you see my book on a shelf (virtual or otherwise) next to a multi-million selling author the only real difference that will catch your eye will be the title and author name.

If I fail in this, it will not be for lack of trying.

4: Amazon is playing dirty pool in these negotiations.
Uh huh, and Hachette didn’t conspire to fix ebook prices with their cronies a while back.  Let’s not be silly and assume either side is up for sainthood here. This is a corporate starship battle and both sides are trying their respective Picard Maneuvers.

5: But Amazon doesn't deserve your blind loyalty!
Who said anything about blind loyalty?  I haven’t renamed any of my kids Amazon Gualtieri or gotten their logo tattooed on my body.  I’m well aware of the work and expense I put into my books.  If I've been lucky enough to earn a following then I’d like to think it's due to the enjoyment they get out of my stories.  However, to ignore Amazon as a major reason that I was able to connect with those wonderful people would be both silly and revisionist history.

I'm simply stating that in a struggle between them and a faceless entity that I owe no allegiance to (and that doesn't affect me, my kids, or the environment in the short term) that I’ll stand behind the company that has done right by me.

Too many authors, indie or otherwise, decry Amazon's policies and practices these days without giving them proper credit for revolutionizing this industry and continuing to be at the forefront of it. I choose to remember those who have empowered me to reach as far as I have.

What does the future hold? Who can say?  The whole indie book revolution could end tomorrow for all we know.  Would that make me sad?  You bet.  Would it take away from what I've been able to accomplish?  Not in the least and no matter what happens going forward I will never forget the opportunity I was given nor those who had a part in it.
Posted by Rick G at 10:42 AM

Thank you for the information. Very interesting. I might give The Hurricane a new name. Amazon would be quite nice for her.

I'm in complete agreement with you, publishers have been regularly charging more for a ebook copy of a book than a paperback. Now there are plenty of factors that determine the price of a physical copy of a book such as the cost to print and the cost of shipping. With a ebook neither of those things are a factor. I'll admit that I don't know a whole lot about amazons sells ebooks but I'd imagine they take a fixed percentage from each sale of a book, which is what EVERY book store does. Publishers don't sell those books to retailers for the cost on the back of the book, they get a wholesale price.

Add to the fact that they were selling ebooks for the same or greater cost of a paperback until they got busted and even now sell only a little less than a paperback, and I can't honestly feel too bad for either them or the authors who are whining. If they have a problem they should go indie and let there books thrive or die like several authors I've heard about.