Goddamned Freaky Monsters (the Tome of Bill, part 5) has been released. 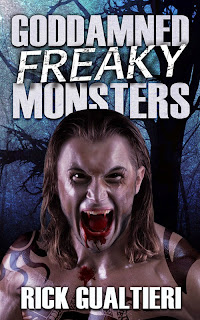 I am pleased to finally announce that Goddamned Freaky Monsters (The Tome of Bill, part 5) has been released! I've been waiting a while to write that and damn does it feel good.

That means you have even more potential story fodder to enter the
The Worlds of Bill Fanfic Contest.

So what are you waiting for?

Need more incentive? Oh okay, well how about another teaser chapter to whet your appetite?"


I stepped back out of the office, still a little wobbly, but infinitely better prepared.

The ass end of the compulsion whispered in my mind. It had obviously been directed elsewhere, probably to my three bewitched comrades. Sure enough, I caught Firebird’s tight little rear disappearing just as the stairwell door closed on it.

The fucker who’d made the compulsion faced the doorway where he’d sent his new minions. He slowly turned back toward me, no doubt sensing my reappearance.

That same bemused grin appeared on his face, and he spoke once more. I didn’t need to be a linguist to appreciate the mocking tone. Once more, he ended things with that annoying father-sounding word.

“Oh yeah? Well, Daddy’s here to give you a permanent timeout, asshole.” A grin appeared on my own face as I lifted the massive weapon and pointed it straight at him.

I’d gotten lucky. Starlight hadn’t really changed much of anything, including the contents of Sally’s drawers. One of them had still contained my former partner’s favorite response to unwanted pickup lines - a Desert Eagle loaded with silver-tipped bullets. Oh yeah. Now we were cooking with gas.

I grasped it with both hands, remembering how I’d almost knocked out my own teeth the last time I’d fired it - ending up looking like Dirty Harry’s dipshit cousin.

Tarzan the Ape Vamp raised one eyebrow, but continued grinning. A small shiver of fear crept up my spine. Did this guy think he was so tough that a load of high caliber...

Then I remembered he’d spent God knows how long locked away like a prisoner. It was quite possible he didn’t even know what a gun was.

Well, if that were the case, then it was time to go to school.

I put pressure on the trigger. I’d seen this guy move. If he went to warp nine and appeared in front of me again, I wanted to make sure there was a photon torpedo waiting for him. Fuck that Picard Maneuver bullshit.

He stepped forward and blathered more nonsense. Another idea hit me as he continued yammering. If it worked, then it was surely lights out for Mr. Muscles. The time for taking chances was over. I’d accidentally let this guy out to play, and my friend had paid for it with his life. He was going down, and I was making sure he stayed there this time.

He took a step to mirror my own. Yes! No matter what timeframe you might hail from, the rules of a standoff apparently apply.

“That’s right, gruesome,” I continued, keeping my voice steady. One of the lessons I’d taken to heart as a vampire was that appearance was everything. Play the role of the bad cop convincingly enough, and people will fall in line to believe it. Show a bit of weakness and the masses will be all over you like hyenas on a rotting corpse. “Be a good little vamp and papa will let you play with his Red Rider BB gun.”

We continued to circle in a clockwise manner.

“WHY DO YOU STAND AGAINST ME, LITTLE BROTHER?!”

The compulsion was subtle, with no force to it. It seemed that Ator the Fighting Eagle had likewise come to the conclusion that it was the only way we were going to communicate.

Little brother? What the fuck kind of family issues did this shithead have? I swear, if he called me “Mommy” next, I was outta there.

The big dummy took one more step, which put his back to the windows he’d blown out upon his arrival. It was time to pay the piper.

“I’M NOT YOUR BROTHER, YOUR FATHER, OR YOUR UNCLE BUCK. WHAT I AM IS THE BADDEST MOTHERFUCKER YOU’RE EVER GOING TO MEET. THE NAME IS DR. DEATH...”

I smiled ever wider. “AND THIS IS MY BOOMSTICK!!”


There are reasons we fear the night. Now he's trying to stop them.

Three months have passed since the fateful encounter in New York City that ended with the disappearance of Bill Ryder - gamer, geek, and legendary vampire. Now he's back - reawakened halfway across the globe with no allies, clothing, or clue as to how he got there. The only thing he's certain of is that his captors plan to use him for their own nefarious ends and don't care how much blood they spill in the process.

Escape might be the least of his worries, though. Civilization teeters on the brink of chaos. Mythical beasts, once thought the stuff of fantasy, are breaking through the veil, intent on waging war against mankind. At their forefront stands an ancient evil, the last remnant of a people thought long dead, and it's about to cut a swath of destruction through the world not seen since biblical times.

Goddamned Freaky Monsters (the Tome of Bill, part 5) is 105k words of foul-mouthed horror hilarity by Rick Gualtieri, author of Holier Than Thou and Bigfoot Hunters

Coming soon to iBooks
Posted by Rick G at 10:27 PM

I'm glad to see its release. I checked Amazon and all i could find is kindle edition. Do you know when it will be available in paperback.

What about the Audible version? ^^

Any chance for an audiobook?

The audio book is in production now.