Sunset Strip: a Tale from the Tome of Bill. Teaser 1 and Cover. 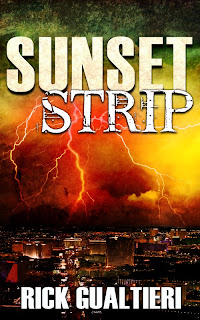 I am pleased to present the cover, blurb, and first teaser for
Sunset Strip: a tale from The Tome of Bill.

My name is Sally.

For over thirty years I’ve prowled the night, one of the undead. In that time I’ve walked amongst you - a wolf in sheep’s clothing - doing unspeakable things, killing countless people.

Now, on the eve of Armageddon, a chance for redemption presents itself. My past has come looking for me, beckoning me back to the scene of my rebirth - the City of Sin.

Those who killed me are intent on finishing the job. I’m outnumbered and outgunned, but they’ve got another thing coming if they think I’m outclassed.

In the end they’re all going to learn a very painful lesson: payback is a bitch.


“So how do vampires play into this?”

“I’m getting to that,” Christy said in between sips of a decaf cappuccino. Ugh, the very thought made me gag. Talk about a sin against mankind. “Two weeks ago, Tom and I went down to visit with his folks. His sister mostly kept to herself, but I happened to see her new boyfriend once when he picked her up. Something about him set off warning signals.”

“Sorta.” She broke eye contact. Before Bill’s doofy charisma had won her over, she’d been firmly in the kill all vampires camp. “I didn’t trust myself, though. Things are better than they were when I first found out I was pregnant, but my powers have still been going a little haywire every now and then. I’ve been self-binding myself just in case. It tends to mute everything.”

“Self-binding? If we’re gonna start talking kinks here, then I’m gonna need something stronger. Don’t get me wrong, I like being tied up as much as...”

“No! My powers. I’ve been using a ritual to keep them in check.”

“Anyway, as I said, everything’s been muffled for me. All I got was a little feeling, like the hairs on the back of my neck standing up. The thing is, it kept nagging at me. So when I got back home, I decided to undo the binding and cast a scrying spell.”

“In other words, you spied on them?”

“We’re back to kinky again.”

She ignored me. “I didn’t get much at first.”

“I take it you kept at it for a while?” I asked, bemused.

“Well yeah, she’s Tom’s sister. I mean, Kara’s probably going to be my sister in law.”

“Well maybe...someday,” she replied, blushing. It was cute in a deer in the headlights sort of way. “Anyway, the guy must’ve been real careful because I didn’t see anything that would have set me off.”

“I was scrying again two nights ago and caught Kara and her mother in the middle of a massive blowout. I really just caught bits and pieces, but it was mostly about his age.”

“He’s definitely a bit older than her.”

“She wouldn’t be the first girl to fall for a guy a few years her senior.”

“I know. I have no idea what she sees in him, though. From the glimpse afforded me, he’s nothing special. If anything, she’s out of his league.”

“Stupid and teenage girl tend to go hand in hand.”

Christy nodded knowingly. “Anyway, the boyfriend showed up and got into it, too. That’s when I caught it. It was only for the briefest of seconds, and I thought maybe I was just seeing stuff considering all the craziness we’ve been through the past couple of months…”

“He snacked on the mom?”

“Nothing that obvious. But his eyes turned black for just a moment. Too fast for either of them to notice, but I did.”

“I jumped in my car and drove down there.”

“Wait, why didn’t you just teleport? I’ve seen you do it before.”

“Like I said, I’ve been binding myself lately. It takes a while to fully shake off. I wasn’t quite up to snuff to travel that way. I could’ve made it but would have been too tired to do much else if trouble started.”

“Just me. He can get a little over-protective about his sister and, well, if things got ugly, I didn’t want him getting hurt.”

“Or fucking things up?”

She stared me in the eye a moment before averting her gaze again. “Maybe a little of that.”

Hah! Good to see she wasn’t completely blinded by love. “And?”

“And I was too late. His sister was already gone, run off with that...”

“Filthy beast of the night?” I asked, arching an eyebrow.

I put my cup down. “Did you ever consider that maybe he’s legit? Vampires aren’t all bloodsucking monsters. I mean, there’s Bill and…” I racked my brain thinking of another good example. Oh fuck it. “…and Bill. But I’m sure there are others like him. I mean, for all you know, they might really have something.”

“Don’t you think I considered that?” Christy asked, her tone clear she felt slightly insulted. “I know that in many ways you’re just as human as I am.”

I was tempted to correct her in that I wouldn’t fall for a dorkus like she had, but I stopped myself short. That wasn’t entirely true. Still, that was the ancient past, another life. I pushed aside the memory, avoiding that particularly gruesome memory lane.

Even so, it bugged me a bit. There was something disturbingly familiar with Kara’s story. I’m sure it’s that way with a lot of girls who wind up seduced by our kind. Here in the city, we tend to forgo the lovely dovey shit and just lure our victims into a dark alley. Of course, half the time they’re hopped up on one drug or another. But not every place was like here, was it? In other parts of the country they tended to move a bit slower. It still seemed like a lot of work for a meal, though.

“So what about the situation convinced you otherwise?” I asked, genuinely curious.

“While I was down there, I did some asking around about this guy.”

“I may have befuddled a few minds in the process.”

“When you've got it, flaunt it.” She smirked. Maybe we weren’t so different after all.

“Something like that. Anyway, it wasn’t too hard to find out that he was from out of town…way out of town.”

“Really?” My curiosity piqued again. “Been a while since I’ve been out there.”

“But you know people, right?”

“Well, yeah.” I rolled my eyes. Hell, I had an in with one of the Draculas, our ruling council. One didn’t get much more in-the-know than that.

“Good, because that’s why I’m here. I’m heading out there and I need information.”

“You’re flying to Las Vegas?” She nodded. “That might not be too smart. What if you…”

“I won’t. That’s why I want your help. If you can find out how many there are and how old the coven master is, that’ll give me enough to at least not go in completely blind.”

“Whoa there!” I put my hands up. “Even assuming I wanted to rat out a den of vamps to you, they’re probably just passing through. It’s a popular tourist spot, even with my kind. They could be...”

“Partly. But I really didn’t need to. I broke into the apartment where this guy had been staying and found a couple packs of these.”

She pulled a book of matches from her pocket book and tossed it on the table in front of me. I glanced down casually at it and my eyes widened in surprise.

I blinked and looked again, hoping maybe my eyes had been playing tricks. There was no mistake. The words were as plain as the fangs in my mouth: Pandora’s Box.

My breath caught in my throat as the name sank in. Memories, long since repressed, resurfaced. It was like someone had kicked in a locked door inside of my mind.

Looks good, and yeah, payback is a bitch.

The one bummer of beta reading the last book for you is it makes it a longer wait for my next book fix!!!

When does the book come out?

It's in final editing now. A couple of weeks probably...definitely in time for Halloween :)