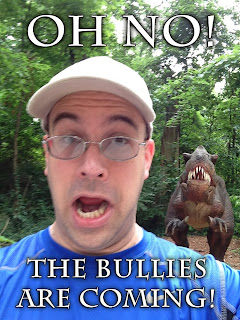 This is yet another post aimed at novice writers. My hope is that maybe you’ll take some of this to heart and grow to be a valued member of this wonderful industry. Let's face facts, there are too many loud-mouthed whiners these days seeking 15 minutes of fame by crying about the unfairness of it all - how people didn't immediately buy a million copies of their work of art.

Just remember, 15 minutes of infamy ends very quickly - often as soon as the next person dials 911 and calls the Waaahmbulance.

Let’s just get this out of the way now. People are going to hate you. There, now take that horse pill and swallow it. Go ahead, choke it down. Tastes pretty bad doesn't it?  But was it truly the worst thing you've ever taken? Probably not.

See, you’ve published a book, put it for sale, or are planning to. The second you push that button you’re a business.  Here’s the thing, people can and will decide they despise a business for any reason they please.  Perhaps your product is shoddy. Could be you have a repulsive personality and would best be served not dealing with the public. Or it may be that it’s nothing you did. Maybe Amazon didn’t send the file correctly.  The buyer might have decided to read your book Demon Hounds from Hell on the day after their own dog ran off.  Heck, you might have just stuck your nose out at the wrong place and wrong time.

It doesn’t matter.  Either way you look at it, someone somewhere will decide they hate something about you. When this happens there are a few actions you might be tempted to take.

Let's discuss a few and, more importantly, why they're really stupid ideas.

- Write a blog post detailing all the horrible people out there who hate your book.  Yeah, that’ll show the meanies. They can’t mess with you. You’re a writer!  Words are your sword and shield.

There's just one problem. You'll notice you don’t see Best Buy or Target  writing blog posts about people who hate their stores, do you?  Why?  Because it’s a stupid thing to do.  People don’t particularly care for crybabies and they really don’t like to be called out.  If you name and shame people A, B, and C, then people D, E, and G may just pass on your wares, no matter how tempting they may look. They’ll assume if you have no problem calling out one group, you may just be the type to do it again. Why would someone go through that hassle when they can easily shop elsewhere?

- Jump into that forum post, conversation, or review and give them a piece of your mind.  Do you want to know a secret?  Fine, I'll tell you.  Nobody is jealous of you for just writing a book.  Get that out of your skull.  You strung words together, that’s it.  Yay, a chimpanzee with a typewriter could do the same thing.

If you make a million dollars with that book then people might be jealous, but by then why would you care?  Haven’t you made your point?

Don’t feel the need to defend your work.  If it's any good, it’ll stand on its own.  If it’s not, you won’t be able to argue people into believing otherwise.  Similarly, you’re unlikely to win the hearts of the masses by telling your detractors how illiterate they are for not understanding the complexities of your magnum opus.  Go figure, people don’t appreciate being told they’re stupid. What a world we live in.

- Paint yourself as a victim, using juicy buzzwords like Bully, Criminal, or Cyberterrorist.  Really? Please tell me you didn't actually think of doing that.  There are people out there who are true victims of crimes.  Congratulations, you just spit in their collective faces.

Now you're probably thinking this is tempting because people love to rally behind victims. There are people all over the internet pouring out their hearts for the downtrodden. The issue here is that if you aren't quite the victim you paint yourself out to be then eventually your house of cards will come tumbling down.  People aren't stupid.  Some will want to get the whole story and when they do, they won’t be overly pleased to find out that you’ve decided to confuse author with professional victim.

Also consider the long term. Even if people do feel bad for you, how long will that last?  Is that truly the way to build a long term audience?  Doubtful as eventually those unread pity sales will dry up, leaving you wondering why people aren't flocking to your subsequent efforts.

- Seek out communities dedicated to fighting back.  There’s a website out there, I won’t name or link to them, but let’s just say their initials start with ST and end with GRB.  They’re a collective dedicated to stamping out all those horrible monsters that are destroying writers’ lives.  Another way of looking at that, though, might be: targeting people they’ve decided are responsible for their own personal failures.

Don’t believe the hype. As an author, consider what types of other authors you want to associate with. There are those who are dedicated to improving their craft, putting out better books, and growing their audience (however slowly). Conversely there are those who would rather bemoan their lack of success and point fingers. Consider your choice carefully here.

Even if you somehow decide that groups like these are a swell bunch, I would ask you to consider the logic there. You’d effectively be aligning with a group that is hoping to silence a portion of the population. Not cool for a purveyor of words. Even worse, you’d be a business that’s effectively trying to stamp out those you think are bad for sales...i.e. potential customers.

Imagine a collective of neighborhood stores banding together to crush those who say things they don’t like. Say something negative about Bob’s Butcher Shop, and the next day your name and home address might be posted on the walls of these businesses along with whatever nastiness they care to label you with.  As a customer, would you ever want to do business with these people?  Hell, maybe Bob is a freaking great butcher, but perhaps it makes sense to just drive to the next town over because you’d rather not give your money to someone like that. His burgers might be good, but they're probably not that good.

There are plenty of other examples, but hopefully you get my point.  Even if common sense and/or decency doesn’t tell you these are bad ideas, try thinking strategically for the long term. Always ask yourself whether today's petty victory is jeopardizing your plans for tomorrow.

That being said, now that we've gone over some of the things you shouldn’t do, what about the other side? There are so many do nots here, what should a writer actually do?  Well, I’ll tell you.

Take a deep breath and sleep on it. Let the heat of the moment pass. Today's crisis can often seem minor tomorrow.

Concentrate on the important things. Put out more books. Become better at your craft. Let your stories speak for you. Redirect that anger toward dedication to not giving up. The best way to "show them", if that is indeed what you feel you must do, is not to call them names - a five year old could do that.  It's to become better, to rise above it, to succeed despite the odds.

I’m not advocating rolling over and letting people trample on you.  There are some that claim advice such as this is an admitting of defeat, of acknowledging that we have no voice other than our books.

Bullshit I say. I prefer to think of it as being smart and not picking pointless fights in which there will ultimately be just one loser...you.

Seriously, you’re a professional author now or you soon will be.  You have stake in the game.  The only one who will truly be hurt by any shenanigans that backfire is you.  Sure, maybe you got in a good insult to that meanie reviewer, but guess what...they’re not selling a product, you are.

Always remember: if people decide your behavior speaks ill of you, then that next book they decide to not purchase might just be yours.
Posted by Rick G at 3:38 PM

I blame my failures on my repulsive personality. Thanks for the reminder not to waaah.

Same here. I embrace my repulsiveness, not apologize for it.

I own my repulsiveness.

Ok- I'm not a writer. At least not of books. Your advise is timely and wise though. Just wanted to say thanks for the fun reads and came across your advise to new writers. (Notice my dislexic writing style? My sentences never come out in the right sequence.) Anyways thank you for your irreverent, real and just fun characters. Don't you stop.

Interesting. I have seen the arguments before and mostly see where a writer might want to do it when it was a specific point that the reviewer found wrong but it wasn't. I do sometimes get into these kinds of things on my blog but not naming names. It is an interesting part of writing to look at what someone else didn't like, try to think if it is fixable or accept you can't please everybody.

The most interesting negative review I ever got was the writer liked the book 3/4 of the way and then it just bored her so much that she quit reading, didn't even skip to the end, which is what I'd have done. What it did for me though was not a desire to reply but rather to try to figure out where I lost her at that point (asking her what was going on could have saved me some time). I decided it was the art aspect of the book and maybe the old lady characters which meant I couldn't fix it as it was important to me as the writer, but I hate to admit it it made me laugh not in ridicule but seeing the humor of having written a book that totally lost the reader that thoroughly at a point I myself actually liked as one of my favorite parts ;) . Alas it is a fact of life in writing or reading.

I just beta read for a friend and there was a similar problem. In a key chapter, she got really descriptive. It painted an awesome picture but made me forget about why I was supposed to care for the characters. I told her "more character introduction / less details about the wood paneling". :)