Panic at the Disco...err Goodreads, that is

It was quite the interesting evening last night.  I took the night off from the internet to introduce my gaming group to my new D&D character (after the fuckers executed my old one last week due to a little misunderstanding about supporting evil cultists...yeah, payback's gonna be a bitch! :).  Elsewhere, people flipped the frig out over at Goodreads due to some policy changes, which you can read about here.

In a nutshell, Goodreads has decided to take a stance that book reviews and shelves should be about books and not author behavior. Anything they determine to not fit these guidelines can be deleted. Some are seeing this as censorship by a company that's bending over due to either a fear of lawsuits or the dictates of their new corporate masters.  Others are dancing in the streets because they feel that their critics have now been silenced and thus manna will now magically rain from the heavens in the form of book sales. 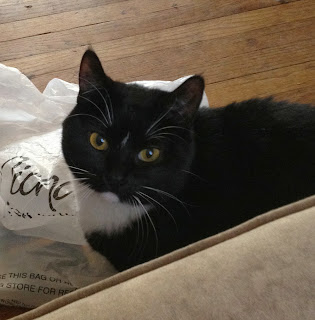 The truth, though, is nothing has really changed. For those concerned about free speech, I would offer that there won't be much difference in that regards. Goodreads has always had policies and they have always enforced them when they see fit.  There has been no gagging of free speech because it's never been about that. Its their site and their rules - much like thousands of other forums across the internet. Cross those lines and you'll see just how free your speech there isn't, and that goes for anyone.

My advice to this group is relax. Here, take a look at this picture of my cat and breathe deeply.  I think you'll see that in the end there isn't all that much to worry about.

You won't be forced to like a book that sucks nor like an author who's a dickhead. Likewise, I don't see anything that says you can't call out an author for being a dickhead in any of their forums, or make mention of the author in your review as long as the focus is the book itself.  I can understand this. While I as a reader might be interested in learning that a writer is a jerk, if I click on a review for a book I'm expecting to see at least something about the book itself. My interpretation of the new rules, however, is that you are still free to mention the author and/or their behavior as long as that focus on the book is there.

To that other group I mentioned above, the ones who now see themselves free to be as big of assholes as they can because they wrongly assume the rules now state they can't be called out on it, all I'll say is don't make me laugh.

Some words of advice for authors, new and established.  There is no golden ticket. Succeeding in this industry is difficult even if your attitude and talent are all in the right place. If they're not, though, you've pretty much bought yourself a ticket to failureville.

If your books suck, no amount of spin, PR, threatening, or cajoling will change that.  Put a bow on garbage and it's still garbage. Also, and here's the kicker, nothing has changed with regards to telling to the world about it. You can still be one-starred and shelved for writing a piece of shit...and I, or anyone else, can still call it exactly that. That hasn't changed. You still need to focus on quality. Ignore that at your own peril.

So fine, maybe your book is okay...good even, but perhaps your attitude isn't. You enjoy berating people who leave less than five star reviews on your book, telling them how stupid they are for not understanding your genius.  Maybe you love calling people out as ingrates for not leaving any reviews. Heck, maybe you even get a kick out of trying to sue people if they don't say the right things about you.

"Congratulations to me!" you say. "Goodreads has given me free rein to be the dick I was always meant to be!"

Hold on there, Hoss. See, there's nothing of the sort. Goodreads is simply telling people that if you're going to review a book, then make it about the book. Likewise if you're going to create a shelf for that book. There's nothing that says I can't call you out as part of this or in one of their many forums. There is likewise nothing that's going to stop them from banning your ass if you decide to act like one.

But here's the real fun part. Even if, say, they did - you still lose. Say tomorrow they adopted a policy of "Nothing mean said about authors any more, ever again!" I still have my blog. I have Facebook. I have Twitter, pinterest, email and a metric shit-ton of other forums in which to tell my friends what an asshole you were to me.  Hell, I could even write an article for Salon or the Huffington Post about the whole sordid affair if I so choose.  So can anyone else and this isn't going away any time soon.

If you're unprofessional, eventually people will learn about it and it WILL (rightfully) hurt your sales. No minor rule update is going to change that.

In the end Goodreads is an awesome place for readers and authors alike.  Go there to discuss books you enjoy, topics you love, and other fun stuff and you'll be fine. Go there to spam, harass, or just be an overall jerk and I think you'll discover that it's business as usual with regards to the reception you'll receive.

Now if you'll excuse me, I have to get back to plotting horrific revenge against my fellow adventurers...

I thought the phrase was "metric fuck ton."

Just when you think you have all the answers, I change the questions.

Good article, Rick. There are always ways around rules. Always. And if it stops some of the more blantant trolls, that's a good thing, surely?