The Mourning Woods...Cover and Teaser 2 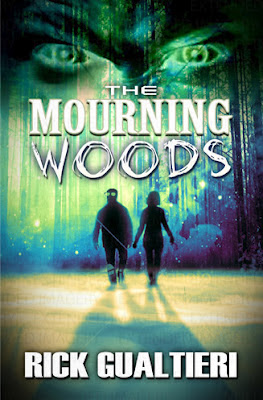 I hope you're having a pleasant holiday weekend.

It's been a busy couple of days for me.  Last week I had my very first book signing.  A few people have been asking how it went.  The honest answer is it was fun and I learned a lot; however, it was also fairly slow.  Sadly, I had to bag my reading as almost everyone who did show up had a small child in tow.  The selections I had picked were fairly tame, but were still well within the PG-13 range.  I don't mind traumatizing my own kids, but I prefer not to horrify others (or get beaten up by their parents :) .

Alas, the art gallery crowd is probably not my audience.  Not a lot of horror lovers there.  Fret not, though, I am already moving ahead with some new plans.  Here's a hint: comic book shops...we'll be talking soon.

OK, so on to other stuff.  As I've mentioned before, I have a new book that's coming out in roughly a month.  It's the third in my "Tome of Bill" horror/comedy vampire series.

To help whet your appetite for the misadventures to come, I shall be posting various teasers from the book between now and launch. Oh and what's that up above...a low-res sneak peak at the cover.  Pretty cool, no?

Now without further ado, I present to you teaser 2 for


But that's not all, true believers!  I figured I'd mix it up a bit this time. Thus I present to you a choice.  You can either read this selection, or click on the video below to listen to me read it to you.  Yeah, what can I say?  I was bored Saturday night and playing with my cellphone.  If you pick the video option...well I apologize in advance.  :)

I followed Dave in and shut the door behind me. Fortunately, his place was vampire safe during the day. The guy kept his apartment as dark as a cave. It was perfect for both gaming and not bursting aflame. Being that we still had a few hours before the rest of the party arrived, I followed him to the back room where he kept a makeshift lab.

“Same as usual,” he admitted. “Until I get some corporate backing, I’m stuck using whatever shit I can purloin from hospital storage.”

“Tell me about it,” he sighed. “I’ve been working on this stuff for the better part of a year. Figured I’d have some breakthroughs by now.”

“Almost. I mean I’ve isolated some bizarre protein strands in your blood, but I’m fucked if I know what they do. Originally I figured it was some sort of virus in your system...”

“Oh well, you tried,” I said, turning back towards his living room. I can’t say I would be too sorry to see this end. I couldn’t help but feel like a lab rat around Dave lately.

“Not so fast! (Damn!) It doesn’t mean I’m giving up. I think it’s time to refocus my efforts.”

“I need to take this back to square one, watch what happens during the vampire turning process.”

That caught my attention, and not in a good way either. Yeah, Dave was definitely starting to get a Dr. Frankenstein vibe to him.

“I really hope you’re not suggesting I bite someone, just so you can watch them go from living to undead. That’d be kind of fucked up.”

He shot me a withering glare. Apparently he had been taking lessons from Ed. “Do I look like I want to go to jail? Let’s be serious here for a second. I want a nice comfy research grant, not to wind up some convict’s bitch.”

“Did you learn nothing in college? When science wants to test something, we turn to our four legged friends.” With that, he pointed out a little tank sitting off in a corner of the room. Inside were a bunch of white mice.

“You want me to put mice in my mouth?”

Dave chuckled in response. “If I was going to do that, it would be to post the pictures to Facebook. No. While the thought of you chewing on rodents is amusing, I’d prefer to obtain a venom sample so I can test it under controlled conditions.”

“For lack of a better word, yes. Since I can’t seem to isolate a virus, it stands to reason that there’s something else in a vampire bite that causes the change. It might be saliva, but I’d be willing to bet it has something to do with those nasty canines you’re sporting.”

I rolled my eyes (guess Sally’s starting to rub off on me). “Did you ever think that maybe it’s beyond knowing...supernatural and all that crap? Maybe it’s just magic.”

Now it was Dave’s turn to do the eye-roll. “In the Middle Ages, people thought the sun was magic. Hell, if you showed your cell phone to certain tribes in the Amazon today, they’d either worship you or burn you at the stake. Magic is just a bullshit term for stuff we haven’t figured out yet. I, for one, intend to figure it out.”

“The same way they milk snakes.”

“Dude, I know you work long hours and don’t have much time for a social life, but no way are you milking me.”

“Would probably be the most action you’ve gotten in a while,” Dave sniffed. “But let’s not be stupid here.” He grabbed a cup from a shelf. The top was covered in some sort of plastic membrane. “Here, bite this.”

To say I was somewhat less than impressed would be an understatement. “You do realize how batshit insane this is, right? I mean outside of the stupidity of milking me for venom, you’re planning on using it to make vampire mice? Seriously, tell me that’s not a low-budget horror movie in the making.”

“I have it covered,” he insisted. “I have welders’ gloves for any handling that needs to be done. The tank is reinforced Plexiglas, and it’s sitting right next to the window. All I have to do is open the blinds.”

“And if one should escape?”

“I bought three dozen mousetraps and a pound of raw, bloody, chop meat.”

I blinked in surprise at that last one. “Well, ok that is pretty fucking clever.”

“Thank you. Now bite!” he commanded, handing me the glass.

I sighed. Oh well, in for a penny. I extended my fangs then also blackened my eyes...hey might as well make a show of it, and did as asked. About a minute later, Dave said that was probably good enough and took back the glass. I don’t know if it was venom or just my drool, but there was definitely something collected inside of it.

“Just one more thing,” he said, placing it to the side. He began to rummage in a nearby desk.

“Let me guess, more blood samples,” I sighed, starting to roll up my sleeve.

“Not quite.” He turned back to me holding a pair of garden shears. “Take off your shoe.”

“I need a more extensive tissue sample so I can continue testing your regenerative abilities.”

“I figure one of your little toes should work. I’d ask for a finger, but I know you do a lot of typing.”

I held up my hands and started backing away. “Whoa there, Hoss!”

“Oh don’t be such a baby. It should grow back before you even leave here today. Didn’t you say that other vampire’s entire hand grew back?”

“Whatever. It’s not like I’m asking to cut off your dick. It’s just a little toe. Evolution-wise, they’re not even necessary anymore.”

“I don’t care. I’m not letting you prune my digits, no matter much unnecessary they are.”

“Pity. I was planning on dropping a vorpal weapon into the game. Doesn’t Kelvin use a saber?” he asked, referring to my character.

“Not gonna work,” I replied. That lasted all of two seconds before I blurted out, “What kind of plusses are we talking about?” Damn my weakness for treasure!

“Four at the least.”

“Oh and did I mention that the lovely Princess Sheila was considering making you her royal concubine as thanks for saving her from those giants?”

“No. No fucking way. Not going to happen. I don’t care if you throw in the armor of the elder gods too. There is absolutely nothing you can say to convince me.”


Ten minutes later there was a knock on Dave’s door. It was the cops. Guess his neighbors got a little freaked out by all the screaming. What a surprise. It’s amazing just how many nerve endings are contained in one little toe.

Sounds like Bill just can't catch a break.  A toe...ouch!  Sadly for him, that's not the worst pain he's in for. Why? Well that would be telling. You'll have to wait and see...