The Rule of Three Blogfest is over and so is my short story, Ren Faire. I hope you enjoyed it. If you missed it you can find the links below: 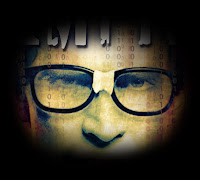 Since I didn't give much introduction during any of my parts, preferring to let the story stand on it's own, I figured I'd give a writer epilogue of sorts. I think it's always cool when one of my favorite writers lets me into their heads to see what fuels the madness, I hope you will too. As an added bonus, at the end of this I have posted the alternate ending to Ren Faire.

For starters let me just say, I enjoyed the ever living hell out of this contest! It was great fun both writing about the town of Renaissance as well as reading the other entries. You did read the other entries, right? Well if not then you should. Follow the Rule of Three links at the top of any of the parts of my story to discover all of the other wonderful stories out there. Don't worry, I'll wait for you to get back.

Alright, all set? Yeah I know, your eyeballs are probably bleeding now. Sorry, I should have mentioned first that there were a lot of other stories. However, they were good weren't they? Well worth the eyestrain if you ask me.

So back to Ren Faire. I had been considering writing some short stories to expand upon the world of Bill Ryder, my main character from Bill the Vampire. When I read about the Rule of 3 Blogfest it seemed like a match made in heaven and part one practically wrote itself. Why on earth wouldn't a geek like Bill and his two dorky friends, Ed and Tom, want to go to a Ren Faire? Things like that (Comic-cons, Star Trek Conventions etc etc) are practically etched in their DNA. Unfortunately, as is the case with such hastily made road trips, it turns out that Renaissance is only the name of the town. They don't actually host Ren Faires there, and my guess would be a good deal of the residents wouldn't even know what one even was. Hijinks thus ensue.

I also figured plopping my characters into this town would be fairly unique amongst the entries. Renaissance was presented as a town of mystery and secrets. There were literally infinite possibilities for epic fantasy and adventure there. Thus, I figured that's probably the route that many of the other stories would take. Many of them did and they're darn fine tales. However, my take was to make it a full blown comedy, one in which the many mysteries of Renaissance would be treated as little more than a side annoyance by our characters.

Therein lies the comedy. After all, this is a place with a deep history. Many great deeds have been performed in Renaissance, some heroic some wicked. What better fun than to introduce a bunch of characters who would completely dismiss the entire thing as a "Bumblefuck of a town"? Of course, the other parts of the comedy are in seeing them get sucked into Renaissance's dark history regardless. Bill, Tom, and Ed are not heroes. They're just clueless dweebs who somehow manage to stumble upon crap like this, a modern day Scooby-Doo gang if you will...albeit with a lot more four-letter words.

As for the process of writing all of the parts, I'll go on record as stating I had no idea what the ending would be when I started out. We were told that each week we would be given prompts, so each week I purposely left off on a cliffhanger...the thing being that I didn't know what the resolution to the cliffhanger would be until such time as I saw the prompts and started writing. Chaotic? Yes. A lot of fun for me as the writer? Also a big yes. I also figured that stayed true to the challenge. I didn't want to write a full-on story and then try to awkwardly fit the square shapes of the story into the round holes of the prompts.

And that's really about all there was too it. I went into this with the goal to have some fun, entertain a few people, and torture my characters a little. At the very least, I know I succeeded in the first and third of my goals. Judging by the kind comments people left here throughout the story I like to think I succeeded on the second as well. Regardless, if you took the time to read my story I thank you wholeheartedly!

So what about that alternate ending? Well, if you follow me on twitter then you probably read something about it on the last week of the contest. Either way, it's nothing earth shattering that really changes the ending. I had just originally gone down a different route before abandoning it in favor of the "official" ending.

The word count limit left me with a conclusion that felt too small. Thus I scrapped it at the last minute and started over. Personally, I'm much happier with the new "official" ending, although you'll see that this ending might fit a bit better with the pace and linear storytelling of the first 3 parts. Thus, rather than let it go to waste, I offer this "alternate" ending here as is. Enjoy with my compliments.

As for further adventures in Renaissance, I am told there will be a sequel to this blogfest in 2012. I'll be keeping an eye on that. If time permits, you might just see Bill making a triumphant (or not) return to Renaissance again sometime in the near future. Time will tell...

Possession is a curious sensation. It’s less horrible soul-raping and more like being shoved to the passenger seat of your car. Annoying, but only traumatic insofar as how lousy the driver is. Speaking of which...

As my body advanced, Ed yelled, “You’re the one with the sword, idiot!”

Tom hesitated for a moment then yelled. “Sorry Bill!” as he swung the weapon. I was hoping he was aiming to cripple not kill. However, before he could connect, I saw the nails of my hand elongate. With one slash they cut through the blade like it was paper. Holy crap! Kymara had better mastery over my vampire powers than I did. I really needed to start practicing.

“Insects!” she mocked through my lips. “You cannot stop the prophesy.”

“Yes!” she replied like some comic book supervillain. “Once every century the two sides awaken to do battle. This time, with my help, Heriot’s Pass shall fall and my pets shall be free to ravage the surface. Behold! Even now the combatants stir!”

Sure enough she was right. An unearthly glow began to surround the army of corpses. Suddenly there were multiple sharp sucking sounds as if long unused lungs were taking their first breath in decades. As if in response, the sounds of deep growling could be heard from the other side of the gate. Oh boy!

My roommates, to their credit, used the distraction to rearm themselves. Unfortunately they both grabbed for the same weapon.

“Let go! This one’s mine!” Ed said, yanking a mace from one of the not-quite dead soldiers

“I saw it first.” Tom replied as he tried to take it from Ed.

I could feel my lips turn up in a smile. Kymara wasn’t afraid of them, big surprise.

However, then Tom lost his grip on the weapon. He stumbled back and slammed into one of the soldiers.

“Wait!” Kymara’s voice suddenly cried out. “What are you doing!?”

The collision caused the soldier to tumble into the one adjacent to it. That one likewise toppled into the next in line. One by one, like dominos, they fell. As each hit the ground its desiccated body crumbled into dust.

“NOOOOO!!” screamed Kymara and then suddenly she was gone and I was me again.

As the last of the soldiers disintegrated, the light from them faded and so too did the growling sounds.

I looked around confusedly while Ed barked, “That’s it!? That was pathetic!”

I was just about to agree when Tom yelled, “Take this, bitch!” and shoved a broadsword into my thigh.

“ASSHOLE! It’s me!” I screamed as coherently as I could...which wasn’t much.

“Alright, I freed Bill!” he triumphantly yelled to Ed. Goddamn, what a moron!

The “battle” over, my companions helped me limp back to the surface. On the topic of getting out of this asshole town there was no argument. As we finally exited the store I saw the sun still peeking over the horizon. I put my executioner’s hood back on and we headed towards Ed’s car.

We had just reached it when the sound of a motor caught our ears. Another car was approaching. It pulled alongside us, slowed, and the drivers’ side window rolled down revealing a man dressed in barbarian attire.

Upon seeing me, he turned to his companions. “See!? A town called Renaissance definitely has a Ren Faire in it.”

In response, Tom put a hand on my and Ed’s shoulders and said, “Told you so!”

Great ending. Bill and his friends are fun.

Rick...love all you wrote here. Yeah, no one should have pre-written anything. The challenge and the fun was discovering the prompts, then letting you go from there. Next time, in May, I have a few ideas I want to ask the other hosts about to ramp this up.

600 word max will stay.
once as week will stay
the chance to write a whole new tale or continue will go on the table.
so...ideas are flowing

Glad you did the recap.

And don't worry. I already have the new REN3 page bookmarked. :)