Teaser Chapter - Are You Ready to Chase the Devil?

DEVIL HUNTERS, the long-awaited sequel to Bigfoot Hunters is here!

Deep in the woods, mankind is the endangered species.

Derek Jenner, the Crypto-Hunter, is back! Something is terrorizing the inhabitants of the Garden State, leaving a trail of missing persons and mutilated bodies in its wake. All signs point to the Jersey Devil, a creature long considered a hoax even in the cryptozoological community. Desperate for answers, the authorities summon Derek and his team to investigate.

Now, the hunters are about to become the hunted because what lurks in the forest is more horrifying than they could ever imagine – a nightmare of man’s own making that’s about to set its sights in their direction.

Sadly for them, a corrupt government official will do everything in his power to cover up the terrible secret that lies at the heart of the Pine Barrens … even if it means sacrificing Derek’s team to a fate worse than death. 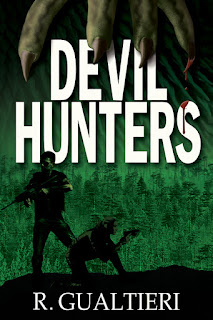 “What have you got there?”

“I think these are footprints,” Danni replied, “but it’s kind of weird.”

“What are they from?”

“That’s the problem. I’m not sure. Whatever it is, it’s pretty messed up.” She pointed to a large print in the mud that was more defined than the others. “See this? That looks like a fairly well-defined toe. But then here, that’s a claw mark. And this bump here, maybe an old break.”

“Or a deformity,” Derek said.

“Maybe. Whatever it is, it’s big and heavy. Look how far down that print goes. I’d say two-fifty, probably closer to three-hundred.”

Francis joined them in peering down at the strange tracks. “It’s on the low end, but still within squatch range. Juvenile, maybe? Could’ve had something wrong with it and was driven out of the clan.”

“Not usually their style,” Derek said.

Danni pointed to other parts of the print. “I don’t think so. Look at this indentation in the back. Could be a dew claw. Never seen a bigfoot with one of those, deformity or not.”

Derek leaned over and studied it as well. She was right. It did look like a dew claw, but more reptilian than anything. The rear of the foot was similar to the prints of a megalania, a giant monitor lizard thought to be extinct. They’d tracked one in New Zealand about three years back, but this print was far smaller. Definitely not a twenty foot dinosaur throwback. It was as if this print was cobbled together from different unrelated species ... which probably meant it was. “A fake?”

Danni stood up and wiped her hands on the seat of her jeans. “Could be. I mean, the way the ground is depressed looks like this came from a real foot, but then there’s the shape. If it is a fake, then whoever carved this was either really good at what they do or really lousy.”

Derek and Danni turned toward Francis, but the big man didn’t appear to be in any danger.

“Sorry, guys. Leaned against a tree and put my hand in something nasty.”

“It’s a bog,” Danni replied. “Pretty much everything here is nasty.”

Derek started to laugh, but was interrupted by the sound of his radio beeping.

He motioned the others over and raised the volume so they could listen. “Derek here. Tell me you got something, Mitch. Over.”

“Something is an apt description.”

“I take it they were interesting.”

“That’s just it,” Mitchell replied over the radio. “I’m not really sure what to make of it. I asked him to rerun the sequence to make sure it’s not a glitch.”

“What did they come back with?”

The three hunters shared a glance, as if they’d suspected all along.

“That’s exactly it. Normally I’d expect high eighties or nineties, even with a contaminated sample. This came back as a sixty-three percent match with Homo sapiens.”

“That’s not very high at all.”

“No, it’s not. Problem is, the rest of the results are all over the map, and that’s not even including the non-organic material in the sample.”

“Non-organic?” Francis asked. “So what you’re saying is the samples were fucked.”

“Maybe.” Derek could hear the frustration in Mitchell’s voice. “I don’t know. From what Arthur read to me, it sounds more degraded than contaminated, which doesn’t make sense either. When you guys are finished chasing ghosts out there, I need to get back to the lab and read it myself.”

“Not so sure about ghosts. Danni found some prints.”

“Hate to throw this one back at you, Mitch, but we’re not sure. They’re either faked or whatever made them is some god-awful mess that I don’t even want to imagine.”

“Start wrapping up on your end. We’ll head back, regroup, and double check those results. If it looks even remotely possible that we’re dealing with human DNA, then I think we hand this off to the cops where it belongs.”

“Yeah. I’m not seeing much reason to do otherwise. It’s a shit show out here. Let’s head in before we end up covered in leeches or something.”

“What about those prints?” Danni asked. “There’s one other thing we haven’t considered about them.”

“If they are fake, then why bother making them all the way out here where nobody is likely to see them?”

Derek had to admit that was a good question, but he didn’t have a good answer to go along with it ... at least not yet. Still, she was right. In their line of work, one didn’t so easily dismiss potential evidence, even if later it turned out to be faker than a three-dollar bill. “Take casts of the best. We’ll take a look at them in the lab. Maybe in better light something will stand out.”

She turned back toward the prints, while Francis took off his pack and began rooting inside of it. He knew the big man would be fishing out his handheld camera so as to get some footage on the way in. That way the journey wouldn’t be a complete loss.

He was about to turn away to ask Danni if she needed any help when he heard Francis zip up his pack, loud in the quiet woods.

It took Derek a moment, but then he realized the forest had gone completely silent around them.


Available now for:
Amazon Kindle / Kindle Unlimited
Coming soon to paperback and audio
Posted by Rick G at 9:33 AM