The best Movies and Video Games of 2015 ... aka the time waster year in review

All work and no play make Rick not only a dull boy, but a highly irritable one as well. As much as I'd love to claim that I lock myself in my cave 24 hours a day so as to crank out words, the reality is I need my downtime just like everyone else, lest I burn out and have a psychotic episode.

No, that wouldn't be pretty.

So that said, I thought I'd give some highlights as to the ways I wasted my time in 2015.

Note: just to be on the safe side Here Be Possible Spoilers...

Avengers Age of Ultron
Pros: It's awesome to see some of my favorite comic book heroes brought to life and the original Avengers kicked so much ass that I'm still trying to wash its boot prints out of my jeans. Lots of cool comic cameos hinting at future movies, and some fun new faces to the franchise. Also, tons of bad guys getting blown to pieces. And let's not forget that awesome three way make-out session with Black Widow, Scarlet Witch, and Agent Hill.  Oh wait, maybe that last one was just a dream.

Cons: Definitely not as good as the original. The Hulk / Black Widow romance is out of the blue and feels tacked on. There's a lot that happens for the sake of it happening.  Scarlet Witch's power on paper is apparently "can do anything the plot requires." Ultron, while having moments, is mostly another wasted Marvel villain.

Jurassic World
Pros: If you don't love seeing dinosaurs on the big screen then you're dead to me.  An overall fun movie to watch.  Chris Pratt is so likeable that he could have spent the last half of the movie disemboweling kittens and I would have still cheered for him. Also breathed some needed new life into the franchise meaning we get to see more dinosaurs on the big screen in the future. I is happy.

Cons: This is a movie that one shouldn't think about...as in ever.  Once you do, you realize that everything that happens here can only happen if the majority of the characters in the movie are cataclysmically stupid.  Also, what's up with those brothers: the younger one feels like they plucked him from 1980 and the older one is on the fast track to get onto the sexual predator watch list. They should have saved the assistant and fed both of them to the mosasaurus.

Terminator Genisys and Fantastic Four
Didn't see them. They were on my list, but bad reviews turned both into "Meh, I think I'll save my hard-earned sheckels.  From the sound of things Terminator was okay at best, confusing at worst. As for Fantastic Four...*sigh* will we never get a good Doctor Doom on the big screen?  Fox, do yourselves (and us fans) a favor and sell the franchise back to Marvel!

Oh and put some fucking pants on the Thing.

Ant Man
Pros: Paul Rudd and Michael Pena own this movie.  It's like everyone here was aware that Ant Man is kind of a joke among heroes and they ran with it anyway.  End result is a thoroughly enjoyable movie from end to end.  Also, much like Captain America Civil War, spawned some awesome memes. Heh, he kicked Falcon's ass too.

Cons: Another forgettable bad guy.  His madness is explained, but he still comes across as little more than evil for the sake of evil.

Star Wars The Force Awakens
Pros: Felt like a Star Wars movie.  Lots of action and a good story set in a universe we all desperately want to be awesome again...and now is!  Rey kicks ass!  Was also cool seeing many of the classic characters again even if a few of them were little more than cameos. 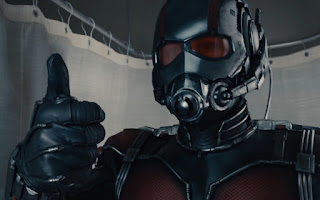 Cons: Kylo Ren is kind of weak sauce as a bad guy.  The entire movie seems to revolve around coincidence.  Oh, I'm sorry, I mean "The Force".  Sorry, some of it still feels like lazy writing to me.  Han Solo felt like a doddering old man rather than the experienced rogue he should have been. Mark Hamill got paid a lot of money to turn around and look pensive.  Where can I sign up for that gig?

2015 Winner: Ant Man
Sorry, Star Wars fans, but as awesome as it was, I enjoyed Ant Man ever so slightly more.  Yeah, I'm just as surprised as you are.

Alien Isolation
Pros: A non-sucking Aliens game.  Brings back the paranoia and fear of the original movie quite effectively.

Cons: Have I mentioned how much I suck at sneaking games?  Yeah, well the second the Alien made its appearance, my death rate shot up to the point where after a while I just walked up to the stupid thing and let it gut me.  You're given way too many weapons for the bad guy to be this unkillable.  Seriously, why does the shotgun do jack-shit against the Alien when it's already been established in Aliens that you can blow one's head off with it???  Never finished it, probably never will.

Shadow Warrior
Pros: I picked this up off the Playstation Network after getting sick of being continually disemboweled in Alien Isolation, Was the perfect counter to it.  An old school shooter that revels in blowing the shit out of bad guys and then spouting one-liners.  This game shouldn't have been this much fun in 2015.

Cons: Dated game play. Not a con as long as you accept its retro nature, but could be a turnoff for some.  I consider this a pro, but for others the non-politically correct nature could be a turnoff. Now, who wants some Wang?

Witcher 3
Pros: An absolutely stunning game in terms of depth, story telling, characters, and action.  A game you can easily get lost in for weeks. Hell, this is one of those games that can make people think you up and died because you'll be playing it so much.

Cons: I seem to have a singular talent for picking exactly the wrong combinations for Geralt when it comes to his would-be sexual conquests. If I were the Witcher in real life, I would end up - well, probably playing a video game about one...alone.  The fighting controls could be a bit wonky at times. I reached level 30 and town guards were still able to kick my ass.  Why the hell weren't they out there saving the world???

Come on, Triss, give me another chance. I swear I'll pick the right button combo this time.

Batman Arkham Knight
Pros: Improves upon an already tried and true Batman video game formula.  The Batman / Joker interactions are perhaps the best that there's been in this series. The different Batman costumes are lots of fun. Sorry to say, but I had way too much fun kicking everyone's ass as the Adam West Batman, Holy Commissioner Gordon is an incompetent douche, Batman!

Cons: The driving sequences could be frustrating.  I don't play many driving games and had to have my kids help me with those parts. Talk about embarrassing.   So far the DLC has kinda sucked.  Oh, and that ending.  Seriously, could they have given a more frustrating ending to the franchise?  BTW, how much fucking money does the Scarecrow, Two Face, Penguin etc have?  I mean, there's an entire city full of their minions. With that much cash at their disposal, you'd think they'd just buy out Google and call it a day.

Pros: An awesome filler game for those times when you have only a half an hour to kill.  There are few things as satisfying as playing as Grimlock and smacking the shit out of Decepticons with a big-ass hammer. Oh, did I mention you can play as Grimlock?  Yeah, well you can, and that pretty much sums up my goals in life.

Cons: A pretty useless item-customization system. As fun as the game is in small doses, it's ultimately about as shallow as an empty kiddie pool.  Button mashing fun, but not much more.

Fallout 4
Pros: It's Fallout, there's a lot to do, a lot to see, and a lot of heads to smash. The open world is huge and it's fun to wander the ruins of Boston going, "Hey, I know that place. Everyone who worked there was an assshole. I'm glad they got blown up in a nuclear apocalyse."

Cons: Missions can be repetitive.  Some odd bugs. Companions are cool, but once you reach a certain point they cease being "people" and become your mindless minions.  Seriously, Piper, I just banged that singer, traveled with Cait until she fell in love with me, and butchered my son in front of you with a chainsaw. Yet you're still all like, "There's nobody I'd rather be with." Damn, that's some commitment, woman.

2015 Winner:  Witcher 3
Although Fallout comes close (especially since I can make some headway with the honeys in the wasteland).

I will just add, though, my kingdom for an open world game that combines Fallout and the Transformers. I'd sacrifice everyone I know to the dark gods for that...err...except maybe you people reading this post that is.  :)

Totally agree on an open world Transformers game!
As for batman, which ending did you get? Because there's a better one if you do all sidequests, find all hidden items and do all 200 odd riddler puzzles. Personally I just youtubed it.
And genisys wasn't too bad as long as you get drunk watching it and try not to think too hard on the plot or past iterations.

I got the lame ending and looked up the better one in YouTube too. :)

Hm, the games you've highlighted are pretty strange :) Those rabbits are something ;) You can see my website with video games reviews and consider writing an article on 2016th?