Only a moron would do otherwise...

As some of you may know, I have a series of YouTube videos aimed at helping my fellow authors - primarily focused on those just starting out in this business.

As such, I get the occasional questions about it - clarifications, things I may or may not have explained to their fullest etc.  One such recent question stood out, though.

I'm enjoying your videos, but wanted to know what your thoughts were on mixing and matching some of your strategies. I've been reading different books on publishing and am trying to come up with my own mix of ideas to try.  For example, in video (redacted), you advise a person to (redacted) and (redacted).  So what if I only did the first, but not the second?  Would it still work? 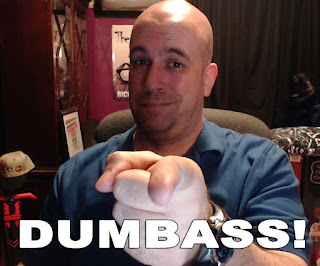 Thanks for reaching out, Newb. Glad to hear you like my videos. However, that happiness is greatly overshadowed by the despair of learning that my wisdom has apparently fallen upon deaf ears. The advice I give is to be followed to the letter. To do otherwise is to court disaster. In such case, all I can do is wish you good luck in striving for the mediocrity you are sure to fall short of.

ps: It's Mr. Gualtieri if you don't mind.

Okay, so maybe that sounds just ever so slightly egomaniacally assholish  Not to mention just a wee bit arrogant, too, eh?

Well, the sad truth is it's not too far from some stuff I've been seeing out there lately. Maybe most aren't quite as obnoxiously direct about it, but I've been seeing an awful lot of advice posts lately, some from really big sellers, that essentially boil down to "Here's the way I do it, only an idiot would do otherwise."

We're talking topics such as whether or not to join Kindle Select / Kindle Unlimited, formatting, all the way down to whether or not you should *gasp* dare to write a prologue.

Forget my videos. If I have even one bit of advice to give it would be run, don't walk, whenever anyone veers onto any topic (outside of maybe professional editing, good blurbs, or covers) where they offer opinions such as "Anyone who takes this business seriously would never...", "No true professional would ever...", or just outright telling you you'll fail if you do otherwise.

There is no one true path to success in this industry. Heck, even repeating someone else's process to the letter doesn't offer any guarantees that you'll ever sell a single book. The reality is that perhaps the only universal factor that successful authors have in common are compelling stories that have found their audience. How they may have found that audience, however, differs as much as New Jersey weather from day to day.

That's not to say you shouldn't seek help. Far from it. I've found the Indie author community to be full of generous people willing to share their strategies and advice. And the truth is some of that advice can go a long way toward tipping the odds in your favor.  For example, Mark Dawson's, excellent videos on Facebook marketing have paid off for a lot of authors (myself included).

The thing is, in the above example, while he does caution against some strategies that haven't worked for him, he never insinuates that success is impossible if you go against the grain.

That's the stickler for me. Some find their path and then conclude that all other paths lead straight off cliffs into a lagoon full of crocodiles.  That is simply not the case.  We each have to find our own path to success in this industry. And often times that means following many different maps, lots of them leading to dead ends, until we hopefully blaze a trail to a better place.

Once there, though, we should have the hindsight to realize that others can't or won't follow in our exact footsteps - or that sometimes it doesn't even make sense for them to try. However, that doesn't mean they won't eventually find their own way.

Success is a dessert with many different recipes and all of them taste just as sweet.
Posted by Rick G at 10:48 AM

I refuse to believe that there is not a single step-by-step formula that will ensure success when it comes to subjective areas like literary taste!