I recently had the privilege to sit down with the awesome EM Kaplan. For those of you not in the know (for shame!) she's an award winning Fantasy and Mystery author and an all around epic Tweeter.  Seriously, if you're on that social media platform, you should be following her. Anyway, I asked her to discuss her newest release, her mystery series, and what we can expect from her next and she was good enough to not immediately file a restraining order ... yet anyway. 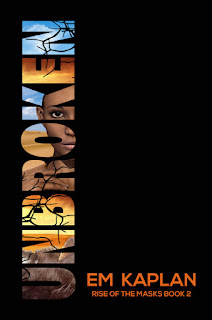 You recently released Unbroken, the 2nd novel in your Rise of the Masks series. Tell us a little bit about it and why you think people will enjoy it.

As the story begins, we see Mel and Ott (the main characters from the first book) setting sail with a rag-tag band of misfits to try to help a young woman find her younger sister. The two sisters have been separated by events out of their control (which happens in the first book). The cultural climate of their world is evolving—it’s on the brink of industrialization—but an array of throw-back, old-world gods and monsters explode on the scene, disrupting the course of change.

Unbroken has the same cast of lovable, fascinating, and occasionally deadly characters as Unmasked, plus a couple of new ones. If you haven’t read book one, the second book has a little prologue that will help you get some context. I don’t think you’d be lost if you haven’t read the first one, but I admit I’m the kind of reader who likes to start at the beginning.

What sets Unbroken apart from other books in the fantasy genre?

I call this series epic fantasy because it has all of the markers of that sub-genre of fantasy—magic, swords (or axes, daggers, and spears, as the case may be, because I’m not all that swordy…I’d rather be a mage or a rogue), it’s set in an unrecognizable world, and it has the potential to be long. But the truth of the matter is all the world-building and plot mechanics are secondary. Characters are most important to me.

Ott, the berserker, isn’t just the muscle of the group. He also has a sense of humor, a checkered past, and a few self-esteem issues. Readers should have a good idea of how he’s going to react when a buxom barmaid, Daisy, tries to jump him—but also be surprised when he acts in an unexpected way that still makes perfect sense.

Mel is a strong person with powerful abilities—but also with a major social disability. She’s a failed Mask—Masks don’t show their emotions—so she hasn’t interacted much with normal people. Yet, she’s making her way in their world…finding friends and her own kind of fantasy Cheers-level acceptance. Go ahead, I know you want to sing the Cheers theme song now.

Well, yeah. Who doesn't want to be in a place where everybody knows your name? You’re also known for your Josie Tucker Mysteries. As someone who can neither write nor solve mysteries, I envy you greatly. Tell me a little bit about your mindset and process for setting up the plot and the clues for readers to follow.

I’m interested in the dumb things people do for smart reasons. And the smart things people do for dumb reasons. Although I’m fascinated by forensics shows on TV, I don’t really want that level of scientific detail in my books—there are plenty of good puzzles lying around caused by personal motive and opportunity.

On the other hand, I’m a terrible liar. My face is like glass, and the same goes for my writing. So if I’m trying too hard to manipulate plot kinks and red herrings, it’s going to crumble apart. Sometimes the most ridiculous situations are caused by the simplest things.

I didn’t answer any of your questions, did I?

Not really, but I'll just assume that's another mystery I wasn't meant to solve. :)  Do you ever wonder if you’re giving away too many or too few clues for someone to figure out whodunit?

Yes. All the time on the “too much” side. Sometimes the clues aren’t even in the body of the book. Shhhh. I’ll say no more.

You're killing me here. Okay, moving on ... Mystery or Fantasy?  Is there one you enjoy more?  Is there a genre you’d like to write in, but haven’t yet?

I like both mystery and fantasy—but my mysteries have found an audience quicker than my fantasies. Sadly, fewer sales might mean a longer wait before I wrap up the Rise of the Masks series. I write two books a year, and 2016 might be the Year of Two Josies. We’ll see… I have some other books half-written, but any more genre-switching might require a pseudonym. Marketing books in different genres is exhausting and sometimes confusing for readers. It’s probably better to stick with one genre. Then again, I’m an indie writer. I make the rules. Kind of.

Tis the blessing and curse of being an Indie Author.  Speaking of, which authors do you enjoy / have inspired you. Favorite book from each?

I really dug Neal Stephenson’s Interface. A lot of people didn’t like that book because it’s a social rant, a political farce. It was West Wingish before West Wing was around. I’ve read Interface a few times, but not in the last decade. Yet, it still comes to mind first.

Then there’s Agatha Christie’s The Man In the Brown Suit—a quieter, more romantic one of her mysteries, atypical because it doesn’t star either of her famous detectives.

And Jane Austen’s Persuasion, which features an older, more mature heroine…also atypical of the author. Are you sensing a pattern here? I never noticed that before.

My friends tease me because I rant about how I read A Game of Thrones not long after it came out. (I was working in a book store.) And I brought it to them to read. It’s a modest claim to fame in my small circle of nerds. 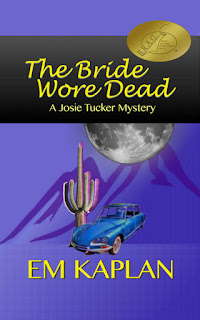 When did you begin writing?  If you could contact your fledgling author self, is there any advice you’d give her?

I used to write in the middle of the night when I was a kid—maybe nine or ten. I’d use a flashlight and a pen and notebook. If I met little Emily, I’d say, “Good job, Pem. But could you stop training yourself to be an insomniac?”

Wait ... Pem?  Okay, maybe we'll save that for next time. Gotta leave a mystery author a little mystery in their life. What’s next for you?

I’m writing a Josie Tucker Christmas story—I have a free Halloween story about her on my blog. I agreed to write Valentine’s Day and Easter/Spring stories with her, too. Maybe I’ll collect them in a book eventually. When my day job quiets down over Christmas break as it always does, I’m diving into the next full-length Josie Tucker novel, tentatively titled, The Cut-Throat Coed.

Do you base your characters on people you know?  If you woke up tomorrow in the world of Rise of the Masks, do you think you’d get along with Ott and Mel?

For the most part, I try to create characters I wouldn’t mind knowing. But if I woke up in Mel and Ott’s world, I’m not sure if I’d approach them. They’re a center-stage kind of people. I’m definitely a behind-the-scenes person. However, Ott has an older sister named Jenny, who I think would totally be BFFs with me.

And now for a little fun. You wake up tomorrow with the power of a Mask.  Tell us a little bit about your new powers and how you would use them in your day to day life. PS: It’s okay if some of the things you’d use them for aren’t exactly legal.  We don’t judge.

I’d like to think I’d use my powers for good and not evil—I’m mostly good with a side of chaotic. So I might have a Gandalf-caliber light show over my house during the holidays. I’d get a lot of enjoyment out of doing good things for the people around me…I know what you’re thinking, with this level of ambition, I should probably go live in the Shire with the hobbitses.

Nah, not at all.  Like I said, I don't judge ... even if I'd probably use that power to immediately set up a secret lair and rename myself Doctor Doom.

Thank you so much, EM! It was a pleasure having you here. 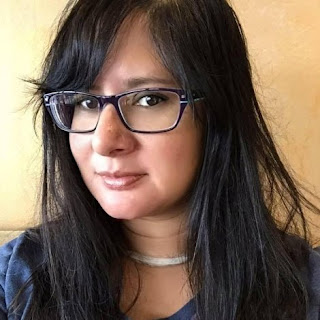 Award-winning author, EM Kaplan, was an 80s kid, spoonfed on six channels of a VHF dial TV. She grew up reading Agatha Christie and Edgar Rice Burroughs in rural Arizona where there were no sidewalks but plenty of tumbleweeds. A former wannabe spy, trombonist, toilet-cleaner, beginner ninja, and subversive marketeer, she currently lives in the frozen north with her husband, author JD Kaplan, kids, and dog.

Learn more about EM Kaplan at:
Her Webpage
Amazon.com
Posted by Rick G at 10:03 AM