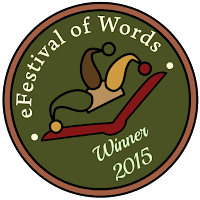 I just got some awesomely good news.

Last year I had the honor of seeing The Mourning Woods nominated for best Horror Novel at the 2014 eFestival of Words.  When the smoke finally cleared, much to my amazement, it actually took a Runner-up award in the category.

Well, then imagine how blown away I was this year to learn that two of my books had been nominated for the 2015 eFestival of Words

The results are now in and BOTH of them won.  Needless to say I am flabbergasted, especially since this is one of those awards where the books are voted on by readers and I very seldom do "VOTE FOR ME!!!" type posts via my social outlets. I like these things to be organic, not the result of who can shout the loudest and longest.

I guess that finally makes me one of those "award winning authors" I'm always reading about. Cool! So where is my fame and fortune?

Oh well. As cool as this is, don't expect me to relabel myself or anything. Bottom line is that winning awards like this are both flattering and humbling, but I also don't want to make this about me. As a reader, I often couldn't care less what awards an author won or what lists they made. To me it's all about the stories. I want nothing more than to be entertained when I read and, conversely, when I write a story my number one concern is entertaining those who have picked it up.

So that being said, I'm off to finish up The Wicked Dead (the Tome of Bill - 7). This Fall should be a good one for Tome of Bill fans. In September I'll be releasing Night Stalker (a Tale From the Tome of Bill) as part of an anthology. Can't really share too many details yet, but from what I've seen there's some awesome talent joining me in that one. After that, it's all about book 7, leading up to the grand finale and ...  I'll stop right there. Much more would be telling.

I'll just get back to work now.  Oh what the hell?  Let's just drop this here too.  Sorry, kids, but daddy needs to use this picture. I'm sure you'll understand one day.  ;) 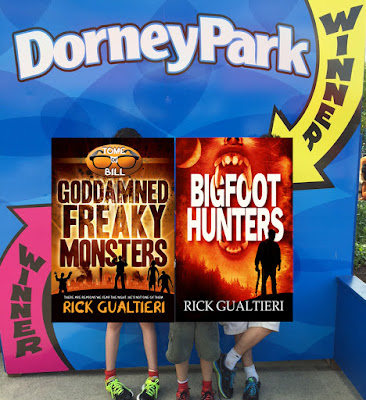 There are reasons we fear the night. Bill Ryder is trying to stop them.

Three months have passed since the fateful encounter in New York City that ended with the disappearance of Bill Ryder - gamer, geek, and legendary vampire. Now he's back, awakened halfway across the globe with no allies, clothing, or clue as to how he got there. The only thing he's certain of is that his captors plan to use him for their own nefarious ends and don't care how much blood they spill in the process.

Escape might be the least of his worries, though. Civilization teeters on the brink of chaos. Mythical beasts, once thought the stuff of fantasy, are breaking through the veil, intent on waging war against mankind. At their forefront stands an ancient evil, the last remnant of a cult thought long dead, and it's about to cut a swath of destruction through the world not seen since biblical times.

When Harrison Kent suggests an outing to the dense forests of Colorado, his friends are all eager for a few days of fun and adventure. What awaits them, though, is far more than they ever bargained for.

They learn that Sasquatch is real, but these are not the shy creatures that legends speak of. A madness has claimed them, erasing their once peaceful nature and leaving in its place a ravenous horde of monsters that's about to descend upon the unsuspecting residents of a remote town.

The woods hold more than one secret, however. A low budget reality show is filming in the area and they have information that could even the odds. Harrison and his friends must make a desperate last stand against the rampaging beasts, but if they can survive long enough they might just be able to reclaim mankind's place atop the food chain.
Posted by Rick G at 9:09 AM