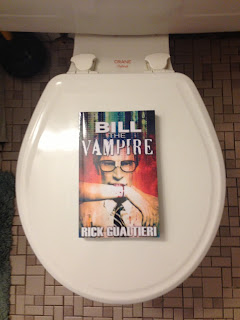 Recently I was asked why I didn't include a photo on the jacket of my paperbacks. The obvious answer should probably be because I’m not someone who most people probably feel the need to stare at, and until I start working out again that’s probably a good thing for all of us. Of course the temptation is there to photoshop myself onto a beefcake body, add more hair, maybe give my eyes a more stunning color, et cetera, but somehow I resist the urge.

The real answer (much like all real answers) is a bit more complicated, though.  See, I used to.  If you’re one of the dozen or so people who picked up the original paperback of Bigfoot Hunters, you may have noticed my smiling mug creepily leering at you from the back cover...assuming you didn't think someone had perhaps shaved one of the titular monsters and put it back there as a cruel joke to society.  It’s okay if you did. I often have to wear a sign whenever I visit the Bronx Zoo that reads “Not an exhibit!” I’m used to these sorts of things.

Anyhow, I didn't leave it there for long. When next I revised the cover, gone was my grinning visage. In its place I left a dark vortex of mystery in which you, the reader, can use your imagination to consider what foul creatures might be lurking there...or in other words, some blank space.  Hey, I never claimed to be a master of graphic design.

This is partially because of what I mentioned above.  The other part is a bit more - disturbing.  See, in a bid to get people to stop laughing whenever I pathetically mewled, “Hey, I wrote a book!” in a desperate cry for attention (daddy, why didn't you love me!?), I handed out a few paperbacks I had lying around. I figured that at minimum I’d get a few, “Fine, you wrote a book. Do you want a medal?” replies.

Much to my joy, though, one of my friends told me a few weeks later that he’d started Bigfoot Hunters and was impressed.  He said it was great bathroom reading.  Oh well, not quite the set of Masterpiece Theater, but as long as he was enjoying it...

But he didn't stop there.   He had to also point out that there was one little bit of weirdness for him.  To paraphrase, “I noticed your picture on the back cover.  So while I’m reading, it’s kind of like you’re there staring at my junk while I take a shit.”

And that was the beginning of the end for me.  Much like a bad song, his words stuck in my mind - repeating themselves over and over again, to the point where I would have gladly replaced them with a lifetime of Justin Bieber music playing in my skull (well maybe not going that far).

Even worse I had to consider the old concept, supposedly held by primitive peoples around the world, of photos stealing one’s soul.  What if that were true? What if every book I sold contained a little piece of me on the back cover...a little piece that was forever doomed to watch people poop?

Alas, I couldn't take that chance...even for those parts of my soul that are kind of assholes and probably deserve it.  Thus I chose to remove my photo to save myself from such a fate as well as spare you, dear reader, from having my disembodied head staring at you while your pants are down.  You’re welcome.

Of course this doesn't save you from the countless other tomes you might have lying around.  Me either, now that I think of it. Great!  Now I’m gonna have to take duct tape to ALL of my paperbacks...especially those ones by Dean Koontz in his porno-stache phase (shudder).

Yeah, I think I’m gonna stick to ebooks too from now on...

I don't read while . . . you know. So nobody stares at my female junk. I would never put my photo on a book. Not that I'll ever write one. But if I did, I wouldn't put my photo on it. It would frighten people.

Makes sense to me. Incognito can be good when there's a purpose.

When you are a famous ass you will appreciate the anonymity. And you can snicker at us fans as we line up for an autograph, listening to us speculate about your greatness.

Ugh! I never thought of that. Thankfully none of my books contain my photo. *wipes forehead*
Very funny!

I never would have thought of this either had my friend not mentioned it. But it's kind of that saying "that which is seen, can never be unseen".

Ah to go back to the days of ignorance :)

Oh my gosh, that is the funniest bit of writing I've read in a looooong time. Wow. Really sort-of stunned by it, actually.

You are effing hysterical, sir. Now how the heck do I follow this blog?