Random Acts of Kindness Blogfest: The Man in The Green Station Wagon

Welcome to the Random Acts of Kindness Blogfest, sponsored by the awesome folks at Wayman Publishing. This is a different kind of blogging event than you normally see.  No in-your-face marketing for a change (please ignore the obnoxious 'Now Available' sidebar to the left :) - just some positive stories about people who made a difference.

I invite you to click the link for the fest and check out the other blogs participating.  Hopefully they bring a smile to your day.  And if they inspire you even slightly, well then the world will be a brighter place tomorrow.

And now, without further ado...


Contrary to popular belief, not everyone who grows up at the Jersey Shore is either well-off or an overly-tanned, under-brained moron.  Once upon a time, houses were bought by normal people for a comparatively modest price down in the smaller summer towns.  I grew up in one such small town and times weren’t always wonderful.

My parents divorced when I was around ten.  My father eventually moved to Pennsylvania. Once there, he more or less did a poor job of keeping up with his financial obligations to the family he left behind (including me and my younger sister).  My mother tried for a while, but eventually she began to develop a fondness for beverages of the hops-laden variety. After a while it caught up to her (and thus the rest of us).  We managed okay for a time, at least long enough for me to become old enough to hold down a part-time job.  Don’t get me wrong, it wasn’t all doom and gloom, but there were definitely dark times during this period.

I remember a particularly bright point during one such time. It only happened once, but it stayed with me ever since.  Things weren’t going so well for us that year.  The bank account had run dry.  The mortgage was overdue, and my small paycheck was being whisked away the second I got it.  It was supposedly going toward household expenses, but I knew it was mostly going elsewhere (alas, I was a meek kid who didn’t speak up nearly as much as I should have).

Anyway, one day a man driving a green station wagon pulled up to our door.  Without saying anything other than a cursory greeting, he opened the trunk of his car and unloaded it - a full load of groceries and then some.  It was so random, but so awesome at the same time.  This person who didn’t know us at all had just dropped off several weeks’ worth of food and household goods. 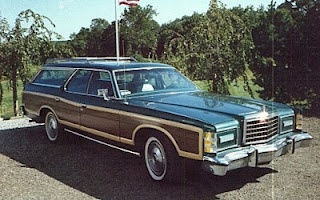 Curious, I asked around in the coming days.  The story I heard was that he had done quite well for himself.  Supposedly (I say that because he was apparently a bit of a urban legend by the time we met him) he’d invested heavily in Chrysler in the days when the company stock had dropped to a pittance. Then when Lee Iacocca came in and turned it all around, he wound up making a killing off of it.  Rather than moving himself into a big house and living the good life, though, he instead retired and decided to give back to the community.  He’d ask around town and learn of people in need. Then every day he’d fill up his big green station wagon with groceries and do a similar drop off to what he did with us.

He never asked for thanks, and in truth the one time I ran into him at the grocery store and tried to express such he looked at me like I had two heads.  I suspect that might have been purposeful, though, and I think I can understand why.  Regardless, he made a difference to many families in need, mine included - one I will never forget.

Thank you, man in the green station wagon.

What a beautiful story and such a kind man! I'm glad he touched your life!

That's so great. What a man. What an example he set, that I know you follow in your way.

Oh wow! What a great person! Thanks for sharing!

Isn't it wonderful to know that people like the man in the green stationwagon exist in this often so selfish world?

What a fantastic story! Now, that's what I can an angel!

Exactly. It's one of those things that keep the old faith in humanity going strong.

Such a heart warming story! That is so cool!

What an awesome man! This gave me chills :)