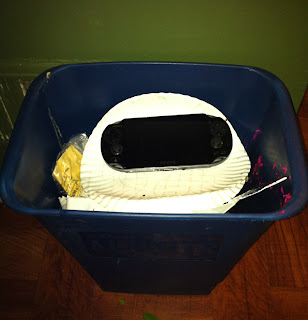 The beauty of having a blog is that I can occasionally switch topics to scream out a hearty screw you to those I feel have wronged me. Congratulations to Sony. They deserve this hearty Screw You!

I've been a fan of their video game line since the original Playstation.  I loved the PS2 and I have been quite fond of my PS3. I'm not much of a mobile gamer, but my kids like the PSP and now the new PS Vita.  I've been a fan even through some missteps: like their idiotic handling of the PSN hack, their continual crippling of features after the fact (removing backwards compatibility and Linux support from the PS3), and their overall increasing arrogance as a company.  Even the most obsessive fanboys have their limits, though.

I never intended to purchase a PS Vita for the household. However, my oldest (ADD boy) started competing in gymnastics this year.  A while back I made him a deal that if he placed in the top three of the regionals, I'd get him a PS Vita.  Before you say anything, let me just add that at the time I thought it was a safe bet for my wallet.  Imagine my surprise (and parental pride...let's not forget that :) when he brought home the gold. So now we're a PS Vita household...for the moment anyway.

The PS Vita goes hand in hand with the PS3 and Sony's PSN (Playstation network) except for one moronic little "security" feature which I had the misfortune of running into this weekend. I have a master PSN account under my name.  Everything else in the household is a sub-account connected to it.  On the PS3 this works fine.  I have the kids' accounts locked down nice and tight. Only the master account can make purchases, but the kids can play them when they log in.  Makes sense and it works.

Not so with the PS Vita.  This weekend ADD picked up a PSN card.  He wanted to grab a game for his Vita.  Being that his account is locked for purchases, we bought the game on my account.  The Vita, however, is registered under his sub account and only supports one account in total.  When we tried to copy this legitimately purchased game from the PS3 to the Vita, we were met with an error that the accounts didn't match.

A quick web search later confirmed that this "error" was in a fact a security feature against piracy, one that couldn't be easily surmounted. No big deal. I called Sony, sure that we could straighten this out.  I figured they either had a workaround or could just transfer the purchases.  Generally speaking, this is all part of that thing that most of us like to call good customer service.

Not so.  Multiple calls, emails, and a chunk of my Saturday later, I was told the same thing over and over again:  1) despite it being a sub account, they consider it completely separate and thus non-transferable (apparently we have different definitions for sub account) and 2) these purchases made in good faith were non-refundable, even for the purpose of unlocking ADD's account to repurchase them.  Their grand advice: wipe the Vita and put the master account in it (complete with all the access and info I specifically DON'T want my kids to have). Needless to say, I shan't be following their "generous" suggestion.

In other words: I can pretty much go taking a flying leap with my issue.  So now I'm stuck with a game I can't use and a disappointed son (because amount aside, there's no flipping way I'm giving them another dime until this is resolved in a manner I consider fair).

Congratulations, Sony, your misguided attempts to stop the piracy problem have done what so many other company's efforts have: treated a legitimate customer like a thief and in doing so added one more person to the list of those who don't care for your attitude.

ps: before anyone says anything, I'm not finished and plan on seeing if I can run this up the flagpole a bit.  That being said, I'm still pissed off and the damage is already done.
Posted by Rick G at 1:30 PM

I have no idea what you're talking about, but you have my complete support.

"Generous" suggestion indeed! I would be so aggravated. Why is it that companies can't just "help" their own customers!!!

I'm sorry that happened to you. :(

Sorry about that, Elisa. I had comment moderation on for older posts and could have sworn I published everything. Guess
I didn't.

I just turned off that feature. I'm finding Blogger's spam filters to be more than adequate.

Hi Rick, welcome to my world of inept customer service reps and companies that don't give a damn about your problems with their product offerings. Pretty aggravating stuff. I'm thinking you could put together a nice little YouTube video about it, yes? This story is reason 193 why Sony is closing down outlets,terminating thousands and making enemies out of their customers. Bah!!! I don't give them long. Of course that could just be my pissed off-ness on your behalf. Your welcome. (giggle)

that sucks no doubt. but in my opinion the entire handling of "sub accounts" is bollocks. Not having kids I've never been interested in sub accounts. All my region accounts are just normals. But a major problem is that you can't ever graduate from a sub account. You're always better off making your kids regular accounts because if they grow up that account will still be locked with all the sub restrictions.

Parental controls all around could be better. It's nice to be able to lock down the console along "levels" 1-9 but without knowing what each level means it's pointless. Why not just use ESRB ratings as parental controls. Why hide the ratings behind mysterious "numbers" The fact that there is a key online is again unfriendly and thus it'll never get used. The fact that when engaged, games above the level can't even be looked at is a HUGE problem. Say you play games and have kids. It might be easy to set a level 3 and then password when you want to play games. But if you have a bunch of PSN games you have NO idea which "LOCKED PSN GAME" is the one you want to play. You have to either literally change your security settings or TRIANGLE-WEBSEARCH.