A negative message the other day, on one of the boards I frequent, got me thinking about the nature of being offensive in writing (and also gave me an idea for a blog post...when life hands you lemons :). Obviously there is potential to offend anyone with literally anything. Let’s face facts. There are thin skinned people out there who are just waiting to be traumatized by things the rest of us would barely even notice. You can see it everywhere. Heck, turn on the news tonight. I’d be willing to bet there’s a story somewhere in the world about someone seeing racism, sexism, or some other ism in something that the rest of us look at and go “Huh?” There’s also the flip-side, those who purposely go out of their way to be shocking, after all there’s no free publicity quite like a good scandal. However, I’m not really talking about the fringe cases here.

As a writer, this is something I tend to deal with quite often. If you’ve read my blog or any of my books, you are probably aware of the fact that I’m not particularly shy about my language. Even so, there is an internal struggle every time I do this. Do I be true to myself, my stories, and my writings, or do I step back and consider whether I should maybe tone things down a little for fear of sending people running for the hills? It’s not an easy answer and I have to admit I’ve occasionally lost sleep over it.

On the one hand, as a US Citizen, I am a huge supporter of the First Amendment. That includes the positive and negative elements of it. I firmly believe the right to free speech includes taking into account that it might be offensive to me or someone else. Ergo the quote: “I disapprove of what you say, but I will defend to the death your right to say it.” Words to live by.

However, I’m not a shock jock either. I don’t go out of my way to greet little old ladies with a hearty, “How the fuck are you and that sweet ass of yours?” Generally speaking, in my day to day life, I have no interest in purposely angering people. I am neither that big of a bastard, nor that much of an attention whore.

As a result, I am constantly forced to struggle. Stay true to character or water things down so as to make it more user-friendly? Ultimately, however, I tend to choose the former. If I have a racist character in my book and I spend pages upon pages building him and his utter contempt of others up, then I feel I do both the character and myself a disservice if I don’t have vile and insensitive language running through his head and out of his mouth. Think about it? Would a real abusive lowlife get angry with his girlfriend and then just say, “Forget you, you silly trollop!” or would he scream a string of obscenities that would make a sailor blush? To me, doing otherwise would just destroy whatever animosity has been built up and in turn make the character into little more than a sad caricature. 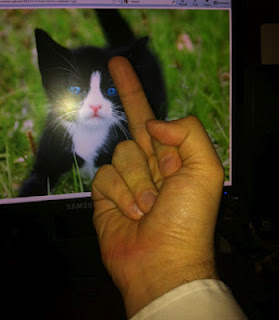 In doing so, though, I personally want people to know what they’re getting into. For example: my novel, Bill the Vampire, contains enough bad language to put it up there with Quentin Tarantino’s finest. Trust me on this, I’ve counted it. I didn’t set out to break any filth records when I started the book, but ultimately the characters and situations led me down that road. Be that as it may, it is what it is.

As such, however, I try to make sure people are aware of what they’re getting into before they buy it. For starters, I obviously don’t advertise it as a YA book...duh! The blurb lets people know about the language, and most of the marketing I do implies (some more heavily than others) the baser elements of the story. In short, if I must offend someone, I’d rather do it upfront before they’ve spent their time and money on the book. They’re probably not my audience anyway, so let’s get it out of the way early.

Don’t get me wrong, this isn’t done entirely out of the goodness of my heart. There is a strategic element here too, namely, I don’t want to get crushed in a bad review by someone who probably shouldn’t have read my stories to begin with. There is also the aspect of preferring to not have people I don’t know (with unknown psycho potential, if you know what I mean) hating me for some stupid dick joke I wrote on a whim as line filler.

For me, this is ultimately about staying true to myself. Sure I may still lose some sleep over it, but integrity is all about not wavering from the straight and narrow. Thus, at the end of the day, I may be sorry that I have offended you, but I am not sorry for that which I have offended you with.
Posted by Rick G at 7:28 PM

It's a fine line sometimes. But I think the most important question is whether or not language (or sex or violence) contributes to the story in some way, rather than being used simply to anger people or sell more books. Ultimately, it's the quality of the writing that matters and which keeps readers coming back for more.

Definitely agreed. Although "exploitation" has its place in entertainment if one knows what they're getting into.

Ie if I'm picking up "The Fallen Soldiers of Munich", probably not. However, if my choice of literature is "The Fiendish Plot of Dr. Orgasm" then I probably shouldn't be too shocked at the content. (note to self: remember that title for future works :)

If you're writing a character who swears a lot, or talks bawdy to use a lovely old-fashioned word, you can't muzzle them for the duration of the book, because the whole point of writing it is that you show the character as (s)he is.
I'm personally very uncomfortable saying bad words in cold blood, and I try not to say them at all, but some of my characters are a lot less inhibited and I have to write their words faithfully: by a few paragraphs into The Diary of Julius Caesar, No Relation (on hold for the foreseeable while I write some other stuff), I had him effing and blinding with the best of them. It was actually quite cathartic, and more to the point, it just would not have worked if I hadn't let him.

It's good to stay true to yourself. I think that's one of the things that makes me love your writing so much ;)

Exactly. I think part of being a story teller is being able to step into our characters shoes, even if those are shoes we wouldn't normally care to step in during the rest of our lives.

The only downside: sometimes writing something that makes you feel like you need a shower afterwards.

Thanks, Elisa! I'd definitely say the same of your writing. You have a way with words that I think could make a total stranger forget that they've never met you.

That means so much especially coming from you ;) Thanks.

Well you could always write it and then have a shower!

I guess it depends on how passionate you are about the subject. As I get older I let a lot more roll...

Hah! It seems the older I get the less mellow I get.

I suppose as long as people understand what they're getting into they can't complain about your content.