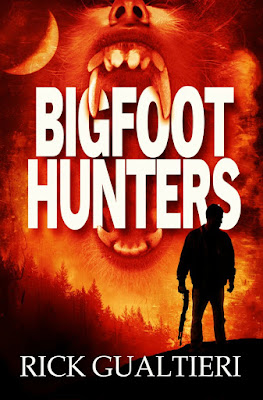 Evolution is about to be kicked in the teeth by some very large feet.

An ancient terror has descended upon a remote Colorado town. The legendary beasts known as Sasquatch have emerged from the woods, hell-bent on killing everything in their path.

The only thing standing in their way are a group of wayward campers, a few scared survivors, and the host of a cable TV show...but it might just be enough.


Wild Feather appeared to hesitate for a few seconds, or at least to Harrison it seemed that way. Perhaps he hadn’t anticipated Rob’s challenge. “The truth is my people have many names for the hairy men of the woods. Most are difficult to pronounce, but they all speak of the same thing; a forest spirit made flesh. A creature that protects the land and those who live in harmony with it. However, this spirit can be wrathful to those who would seek to defile the balance. My great grandfather used to tell of one such defiler as we sat around the fire much like we all do today.”

Harrison looked around at the collective faces. All of the women, Paula included, were giving Wild Feather their rapt attention. Rob was listening too, although probably for another chance to jump in and question Feather’s authority on this subject. As for Greg, judging by the glazed look in his eyes as he peered into the fire, he was in his happy place right now.

“What happened?” Paula asked as Wild Feather continued with his dramatic pause.

“Once, long ago, before the coming of the white man, when the buffalo were still plentiful on the plain,“ Wild Feather began, “there was a man in the tribe. He was a powerful warrior, one of their fiercest braves. However, he was also prideful. After many victories in battle and countless successful hunts, this man began to boast that he had no equal. He could defeat any man and take his wives and horses. He could kill any beast and claim its flesh and hide. He laughed that the spirits were but smoke to him and he had made far too many fires to be fearful of smoke.

“I know what you mean, brother.” Greg chuckled, taking another toke.

“The elders of the tribe chastised the warrior. They said that his pride would be his downfall. That he should give offerings to the spirit world so that they might forgive his arrogance. But the man just laughed at them. He told them that he had earned all of his possessions by the strength of his own arms, so why should he owe the spirits anything. After the shaman’s warning, his pride grew and he decided that perhaps the spirits owed him. Thus he set out to take what was theirs. He began to chop more wood than his fire needed. When he hunted, he would kill more than his family could eat and then leave the rest for the birds. In all things he grew wasteful. The elders, seeing what he was becoming, began to pray for him behind his back. They knew that the spirits were getting angry at the man’s umbrage.”

Wild Feather paused again, making eye contact with Danni, Allison, and Paula, one after the other, as he did so. “Finally the Great Spirit sent one of the hairy men down from the mountains. The beast was already fearsome, but the spirits imbued it further. They made it swift, so that not even the deer could outrun it. They made it strong, so that not even the bear could stand against it. They made it powerful, so that no arrow could piece its hide. Its cries began to be heard in the village when it was still many moons away. The tribe grew fearful as the beast approached, its howls of vengeance growing louder with every passing day. Finally the elders came to the prideful man and pointed at him. This is your fault, they said. The spirits are punishing us all for your wickedness. But the man just laughed and told them, it is just another beast. I have slain the buffalo. I have slain the bear. I will take my bow and arrow and slay too this beast so that I might bring back its fur to warm me by the fire. The next day the prideful man packed up his weapons and set off into the woods to meet the creature face to face.” At that, he stopped telling the story and just stared into the fire.

After a few moments of this, all of the girls chimed in with squeals of, “What happened next?”

Finally after another pause, overly dramatic in Harrison’s opinion, he continued. “None know. Some say the creature overtook him and carried him off to Hell, where the spirits continue to punish him for his arrogance. Others claimed the man had slain the beast and then set off to challenge the spirits themselves. They say that he still walks the woods to this very day, such is his wrath. It was never known. All anyone in the tribe knew was that the beast’s screams ceased and that the prideful man never returned.”

“And then Jason and Michael Myers walked out and slaughtered the campers.” Greg added, laughing at his own joke.

Paula, ignoring Greg’s outburst, gave Wild Feather a wide-eyed look and asked, “So do you believe the story?”

Wild Feather fed another branch into the fire, causing embers to rise up in the air, before answering. “My people have a great many stories. Some are told to frighten children, but others serve as a warning to men. When I became a man I went on a vision quest as all of my ancestors did. In it, I saw many things. Things that give me reason to not doubt my elders.”

“What kind of things?” Harrison asked.

“Such things are not spoken. Each vision quest is for the brave who sees it and him alone.” He then turned back to Paula and spoke in a low voice. “But I have seen enough to believe. I think the hairy men are out there. I can sense them. They watch us. Perhaps they watch us even now.”


I hope you enjoyed this preview!

The full novel, BIGFOOT HUNTERS, is available now from Amazon.
Posted by Rick G at 12:25 PM

There was a Bigfoot convention in my town in 2007. They went out hunting Bigfoot. We moved here after that. I'm really disappointed I missed the hunt. It would have been a blast.

All success to you on the new release, Rick. If you want to come do a guest post sometime, you're most welcome. :)

Hey Rick, first time visitor and great to meet you! Good luck with your book. My kids still believe Big Foot exists. And maybe he does. Its a great topic to keep people engaged.

Thank you! I appreciate the offer especially since I'm trying to be a little more verbal in the blog space this year.

BigFoot convention eh? I miss all the fun ones.

Hey Stephen! Welcome and thanks for the well wishes.

I keep an open mind on the subject of Bigfoot. Personally I think that at least 80% of the sightings, evidence etc etc is misidentification, hoaxes, or just plain people not thinking things through. However, it's that remaining 10 or 20% that I find really interesting.

So exciting! I LOVE the cover too ;) I'm tweeting this.

Thanks, Elisa! You're the best!