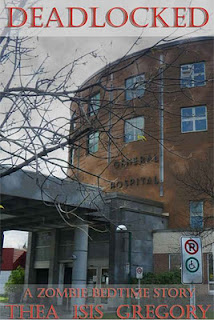 Humor and the Zombie Bedtime Stories

Today is a momentous occasion! No, not just because I’m actually posting something. Don’t be snotty! Today I have my very first ever guest post on The Poptart Manifesto (insert polite golf clap). Since starting down my own writing journey, I’ve been fortunate to rub elbows with a lot of great writers, both traditional and self-published. Some of them are awesome people as well as tremendous scribes. Thea Isis Gregory is one of those latter. She is the author of the Zombie Bedtime Stories series of horror stories, a grossly fun series about...say it with me...zombies!

Thea has just recently released the latest in her series, Deadlocked. It joins her previous titles: Locked in, and Locked Out. She has also been kind enough to offer one of her shorts, Zombie Pride, as a bonus chapter for my upcoming book, Bigfoot Hunters.

Being that humor is something I have a heavy interest in, both as a reader and writer, I asked Thea if she wouldn’t mind sharing her thoughts on this with regards to her stories. After all, one often needs a good laugh during intense horror. It breaks up the tension a bit, offers us a good chuckle, and gives an alternative to curling up in a corner and crying before the monsters can get to us. Thus without further prattle, here are Thea’s thoughts on this:


Back when Locked In was undergoing its initial beta-reads, I received some completely unexpected feedback. The horrifying story I’d written about a girl trapped inside her own zombified body was not only gruesome as intended, but hilarious. Despite my efforts to be completely serious, it seemed that my audience disagreed, one even going as far as to compare my story to Zombieland. I was quite taken aback—who would have thought that such a gory little story would be funny?

In a way, I found this to be completely shocking. People who share my twisted sense of humor do find me funny, but I’m not the kind of person who naturally gravitates towards comedy. I don’t like most comedians, and I find sitcoms to be the very definition of tedious. Strangely enough, I found Star Trek: Deep Space Nine to be hilarious. 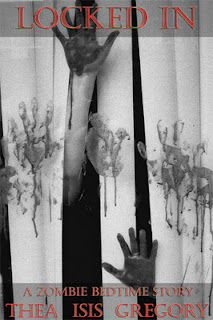 After the realization that Locked In was funny, I became determined to capitalize on my own unwitting hilarity. Based on feedback, it seemed that extreme and unconventional amputations and bodily functions was the way to go. For instance, having Haley vomit parts of her dead boyfriend all over herself was the funniest thing ever. I was going for gross-out factor level infinity, but making people laugh is probably better in the long run.

Topping that in my later stories, Locked Out and Deadlocked, took some extra planning. I didn’t have the benefit of an undead protagonist, but I did have access to a great deal of fodder—characters. The undead protagonist can be funny by virtue of being disgusting, and the fodder is funny because it dies in disgusting ways. It’s a tricky duality to work with, one is just doing what comes naturally, and the other is actively killing fictional people.

It’s important to remember that the gore must serve the story, not the other way around. While clown zombies may be hilarious, if your setting is a research lab or a normal city, it’s best to stick with the kind of zombies you’d expect for that environment. Additionally, don’t make the characters suicidal-stupid just for that one kill scene you have your heart set on—the annoyance at the character will leech most of the amusement out of the scene. So, for Locked Out and Deadlocked, I used human dynamics to get people killed in ways that could be characterized as comical. The most notable example would be the infamous “club him and run for it!” in Deadlocked. I found Deadlocked to be intrinsically funny—it’s a normal guy trying to do the right thing, in the middle of a zombie apocalypse. Of course, it all goes horribly wrong and blows up in his face.

In short, I had to learn to be funny, whether through extreme zombie attacks or the facts of zombie biology. Through a lot of trial and error, I’ve come up with a system that works. Keep the story and characters coherent, no clowns and add a little touch of self-deprecating despair to the protagonist.


I think I speak for a lot of readers out there when I express my appreciation for that no clowns rule! Sorry, but the damn things just aren’t funny. As for the rest, I think it’s spot on. There is literally no place, a zombie apocalypse included, where a little levity cannot be found...even if it is a scenario where it’s a choice between laughing or screaming until your lungs burst.

If you haven’t checked out Thea’s works yet, I highly recommend you do so. They’re some of the best fun that you can have as you watch the world around you go to hell and they’re all under a buck each. When has Armageddon ever been so affordable?

You can find Thea’s works on Amazon and you can find Thea herself on twitter at @Theaisis. Have fun and remember to stock up on your shotgun shells...you’re gonna need them!
Posted by Rick G at 6:58 PM

So much talent! And how exciting about the bonus chapter--that's awesome ;)

Thanks, Elisa! I'm super excited too. Awesome to get a new book out there, but even more awesome to offer the readers a killer bonus from another great writer.