Ready for a dose of Modern Magic? 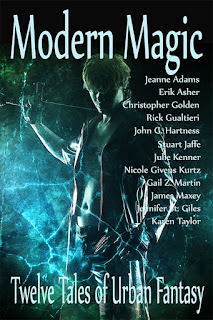 Are you ready for a walk on the wild side? Are you daring enough to enter a place where the shadows are long, things go bump in the night, and the hour of the wolf never ends?

Get ready for 12 complete works by the masters of dark urban fantasy. Featuring some of the best and the brightest of the genre - NY Times Best-Sellers, USA Today Best-Sellers, Bram Stoker Award Winners, Nominees, and Amazon Best-Sellers!

BEST YET, You don’t have to sell your soul to get this deal.

Available for pre-order now ONLY ON AMAZON.

But, much like a vampire racing back to its coffin in the hours before dawn, it won't be here for long.  Grab it today before it crawls back into the crypt from whence it came.

This anthology of ass-kickery includes:

DAYS GONE BAD (Vesik, Book 1) by Eric Asher – An urban fantasy about a necromancer and his vampire sister. And chimichangas.

THE NIMBLE MAN by New York Times bestselling author and Stoker Award winner Christopher Golden & NY Times bestselling editor Thomas E. Sniegoski, the first book of The Menagerie series. They are beings of myth and legend. They possess powers beyond imagining. They are our only hope.

BILL THE VAMPIRE (The Tome of Bill, part 1) by Amazon Top 100 author Rick Gualtieri – Bill Ryder was a dateless geek, but then he met a girl to die for. So he did.

HARD DAY’S KNIGHT – by award-winning author John G. Hartness – A pair of comic book nerds get turned into vampires, and now they have to save the world. The world is so screwed.

SOUTHERN BOUND (Max Porter, Book 1) by Top 100 Kindle author Stuart Jaffe – When Max Porter discovers his office is haunted by the ghost of a 1940s detective, he does the smartest thing possible — starts a detective agency.

TAINTED (The Blood Lily Chronicles Book 1) by New York Times bestselling author Julie Kenner –The first installment of the Blood Lily Chronicles, an urban fantasy romance which introduces readers to Lily Carlyle, a tough-talking bad girl who’s been chosen to save the world, and Deacon Camphire, the darkly sensual man whose words seduce her, but whose actions suggest he’s hiding secrets of his own.

THE SOUL CAGES: A Minister Knight Novel by Nicole Givens Kurtz -Sarah risks everything to save her soul and be reincarnated back into flesh. Now, the real adventure begins…

TRIFLES AND FOLLY (Deadly Curiosities Adventures) by #1 Kindle Top 100 bestselling author Gail Z. Martin – A Charleston, SC antique store is the cover for a coalition of mortals and immortals who have sworn their lives and magic to saving the world from supernatural threats and cursed relics.

NOBODY GETS THE GIRL by 2016 Piedmont Laureate and award-winning author James Maxey — The fate of the free world is at stake as the superhuman battles escalate, wiping entire cities from the map, threatening the survival of all mankind. Who can save us from the looming apocalypse? Nobody!

TOUCH A DARK WOLF (Shadowmen Book 1) by USA Today bestselling author Jennifer St. Giles –Poisoned by evil, Jared fights to save Erin before the murderous darkness in him claims them both .

CELLAR by Bram Stoker Award-nominated author Karen E. Taylor – If Laura Wagner’s inner demons don’t get her, the real ones just might… 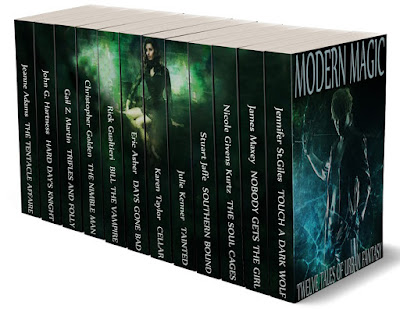