Ten Against the World! 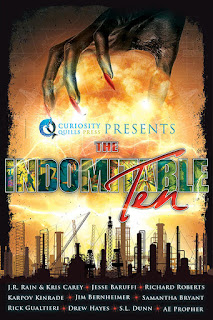 Minotaurs. Nephilim. Demons. Mad scientists. Secret Societies. Superheroes. Supervillains.
What do these things have in common? They are all part of the Indomitable Ten: a tantalizing anthology of novellas that will take you on a wild ride through ten amazing worlds brought to you by science fiction and fantasy greats like:
J.R. Rain
Kris Carey
Jesse Baruffi
Richard Roberts
Karpov Kinrade
Jim Bernheimer
Samantha Bryant
Rick Gualtieri
Drew Hayes
S.L. Dunn
& A.E. Propher.

Find your escape from the mundane with the Indomitable Ten!

Includes: NIGHT STALKER (A Tale From The Tome of Bill)

Here's a small taste of things to come...


For a long time, the unofficial credo attributed to New Yorkers had been “I don’t want to get involved.” This was all thanks to a well-publicized murder from the 1960’s. Most of us like to think that when shit is going down, we’ll react in a way that would make our mothers proud. In reality, oftentimes putting one’s fingers in one’s ears and going “la la la” is the easier course. The thing is, occasionally it’s the wiser one as well.

Sadly, much like the elven battlemage I play at my weekly D&D game, I wasn’t known for my wisdom.

I’d gone a few blocks at most, the empty streets zipping by in the darkness as I put my speed to good use, when I heard the cry.

It had been faint, easy to miss even in a slumbering city, but my hearing was several times sharper than a normal person’s. Despite my intent to get home and kick my roommates awake so as to brainstorm a solution to my problems, I stopped and listened. The cry came again, followed by the sharp bark of what sounded like a small dog. Had someone’s Pomeranian gotten loose and was, even now, rampaging through the streets while its hapless owner chased after it?

Oh well, that wasn’t my problem. Stupid fucking rat dogs. I was about to ignore it and continue on my way when my overly sensitive ears picked up another voice – this one low, barely audible even to me.

“Scream all you want, bitch.”

That stopped me dead in my tracks. A smart person would have dialed 911. Hell, a smart vampire would too, right before getting the fuck out of there. Not that I believed in playing to stereotypes, but I probably didn’t look like the type who’d be wandering these streets alone at this time. The last thing I needed was a suspicious cop thinking I was a meth-head out looking to score.

It was the small part of me enamored with being a vampire that ultimately decided to pursue what was surely an insane course of action. That’s the thing about waking up one day with super powers. It tends to dull our logic circuits while automatically making us believe in our own invincibility. Of course, it’s that kind of bullshit reasoning that makes people sew up a homemade Batman costume only to end up in the morgue by day’s end.

Damn my sense of social responsibility! Despite knowing the monumental stupidity of what I was about to do, I homed in on the direction of the voices and took off at full speed – hoping to not become yet another sad statistic in a city with far too many.

I glanced around the corner and saw them. Two men, both of average height, stood over their victim an old woman, her brown skin covered in wrinkles, easily seventy, maybe more. She was sitting with her back against the alley wall, holding her little dog protectively. The mutt looked small enough to fit inside a hamster cage. As far as protection went, one would’ve been hard pressed to pick a more useless theft deterrent. The little rodent let out a warning bark every few seconds, but even it seemed to sense how idle its threats were.

This was all happening between two rundown apartment complexes. It didn’t take a genius to figure out what had transpired. Apparently granny there had decided to take Fido for a walk, lest the little beast piss her rug again. Sadly, she’d picked a night when there were predators about.

A small part of me wondered where the cops were. The old woman’s cries had fallen silent, no doubt under threat from the two goons accosting her, but the dog’s shrill yips were plenty loud in the narrow confines of the space.

Almost as if in answer to my unasked question, a voice came from above. “Shut the fuck up!” The sound of a window slamming shut followed a moment later.

Such a wonderful neighborhood.

“You heard the man, bitch,” one of the assailants said, his voice betraying a slight Latino lilt. He picked up a discarded flashlight, probably the old lady’s, and threw it against the wall where it shattered. “Shut your fucking dog up. Or better yet, we will.”

The woman shrank back even further, cradling the dog to her like it was a child. Hell, the little rodent probably was to her. When she spoke, her voice was low and pleading. “Please don’t hurt Mr. Piddles. I gave you my purse, that’s all I have.”

The two men chuckled and then the other answered, “We don’t want your purse, you old bag. We want you.”

Oh, crap. So much for this being a simple mugging. What is it with the sick fucks in this world? Had this merely been an altercation over a few dollars, I might still have minded my own business. Now, though, shit was about to get serious. It was time to show these assholes that there were darker things afoot this night.


Coming March 5th
Available for Pre-order now for AMAZON KINDLE
Posted by Rick G at 10:42 AM

Congrats on being included in this compendium. I eagerly await your next "Tome of Bill" book. Your magic fingers must somehow be mercilessly tormented by the countless cortical synapses concurrently firing and forming such a titillating, snarky, brilliant buffet of horror, dark humor, urban...rural...paranormal fantasy(ok, brain candy)!

Having enjoyed many years as an RN, then a legal nurse consultant most of my reading and writing was non-fiction "continuing education. My 2 sons are both happily married IT Engineers. I am an empty nester. I had forgotten how to re-recreate now waiting on my kids, my ex-husband.

Alas, my eldest gave me a Kindle Fire HD for Christmas awhile back. I hope all young-at-heart (yes,I've met many a former "70's Dark Shadows"fans & rabid paperback series) Readers that crave sophisticated,sardonic/sarcastic humor. The Horror and temptation, the seething sexual tension between the protagonists cleverly woven into tight and flowing dialog! The fear of what will ???? Come to be.

Then came RICK GUALTIERI and this 50+ chose to read "The TOME OF BILL" Book# in an ever growing saga and I felt like a teenager again. Quirky? Yes. All the forbidden words the late,George Carlin stated 40 years ago? Hell, yeah, it makes some of these brilliant, geeky characters who they are! (25 years ago no sedatives were given as they are today and having held ALOT different patients hands through the pain, their comments were in context.) Hysterically funny, yep. Horrific & heart stretching...YOU BETCHA.

So, thank you, Mr. Gualtieri,for taking the "sparks" of thoughts you compile into a delightful break from reality. After twilight and some of the other unschmaltzy adolescent fodder that's appeared over the last 7 years or so, your prose are like a brain massage, ahhh vs. the glittery ECT therapy that defines our minds, their are so many mind molesters amongst us but your one of Magical Mages with magical fingers connected to some extraordinary grey matter! Thanks!