A New Look and Feel for The Tome of Bill

Hey everyone.  It's time to share the reason I've been a bit quiet as of late.  It's not because I've quit, died, or run off to enjoy tropical drinks on some island somewhere (although I reserve the right to follow through on that last one at some unspecified point in the future).  No, it's because I've been busy working with my cover artist Mallory Rock to completely rebrand The Tome of Bill series.

Yes, Bill The Vampire and all of the numbered books in the series have a new look and feel as you can see by the above. Now I know that some people were quite fond of the old covers (and, to be fair, some folks hated them too), so the question you have might be "Why change a good thing?" 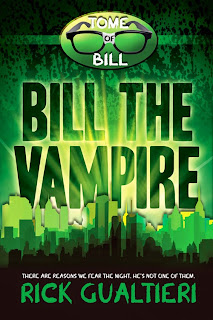 The answer is simple: while I too was quite fond of seeing Bill's bespectacled self on the original cover, the problem was the series as a whole lacked cohesion.  Looking at random covers from the series side by side one couldn't easily tell they went together.  As standalone covers they were pretty darn awesome, but as far as a series goes they fell a bit short of my expectations.

Part of this is my fault.  Hindsight is twenty-twenty, but let's face facts, there are very few authors who start off in this industry having anything even remotely close to a clue. I can't say I was any different. I used to look at each book as no greater than the sum of its pages, a standalone entity. The problem is, you do that with a book and maybe its sequel and that's fine.  Once you reach three or more books in a series, it starts to be a stretch - especially if people are celebrating the storyline of that series.

A series is more than just the stories that make them up. It's a whole identity from top to bottom...and it was time for me to make that identity whole. 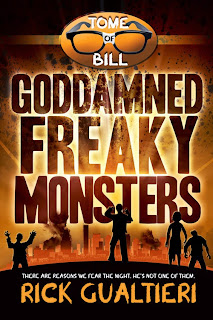 Now in all fairness, I did have some external issues too that led me to this point. I lost my original cover artist after The Mourning Woods.  Rather than pick that time to start fresh, I made the mistake of asking the new cover artists I was trying out to try to match his style. Cover artists are a unique bunch and, while some have similar styles, more often than not they're going to shine best when you allow them to play to their individual styles and strengths.

Tis a lesson that took me a while to learn, but learn I did. At the same time I've been studying the market in much greater detail, learning my comparative strengths and weaknesses in the Urban Fantasy space.  Finally, I felt it was time to move on this and bring The Tome of Bill under one cohesive umbrella.

All that being said, I am pleased to move forward with Bill's new look and feel.  I for one love the way they look together.  I hope you do too.

Bonus: for any authors reading this, I also decided to use this opportunity to broach this subject on another Tales of a Midlist Author.  I hope you find it useful.

I think the new covers are awesome and as an avid reader of books in a series I applaud this decision. When I search for new stuff to read I take the reviews with a grain of salt, however, I tend to try and find complete or at least long series of books so I can get immersed and stay that way for a long time. Malazan Books of the Fallen, Chronicles of Thomas Covenant and others are my normal types of goto reads. With your rebranding you are going to make it a lot easier for others to find your complete series. I don't see it but I do hope you have a numbering scheme on the cover somewhere...?