It's almost Halloween and what would the holiday be without at least one public service announcement. Sadly, I'm ill equipped to discuss anything outside of surviving an attack on one's collection of Transformers - a scenario that will probably be fairly rare for most on this All Hallows Eve.

Fortunately guest blogger Naomi Shaw was kind enough to step in and help me hide my shortcomings with a little info and her awesome infographic about that perennial favorite (and ever present threat): the inevitable Zombie Apocalypse.

Take it away, Naomi!

If you haven’t yet jumped onto the zombie bandwagon in popular media, you still have time. Zombies have never been more popular across so many different types of media, meaning that you have plenty of options from which to choose, any of which will let you catch up quickly so you don’t feel left out during coffee break discussions with co-workers.

Much of what is driving the current excitement over zombies is The Walking Dead. But here are three zombie TV shows that fans of the genre are watching.

1.    The Walking Dead--This show has set records for cable TV viewership for a non-sports show at 17.3 million.
2.    In The Flesh--A quirky and well done British offering, In the Flesh shows an attempt to incorporate “cured” zombies back into society.
3.    Z Nation--The SyFy channel has greenlighted the newest zombie apocalypse show in Z Nation.

Plenty of great zombie movies have been released--far too many to list here. But there are three referenced in the accompanying infographic that will help you familiarize yourself with the zombie genre as its appeared in a few different eras.

1.    Night of the Living Dead--This cult classic in 1968 was one of the most controversial movies of the time.
2.    28 Days Later--A fast-moving zombie outbreak leads to a breakdown of society.
3.    World War Z--The latest big-budget zombie thriller grossed $540 million worldwide.

Books about the zombie apocalypse are plentiful. And although there isn’t one book that’s generating the kind of buzz that The Walking Dead is generating, here are five can’t-miss zombie-related books to expand your knowledge of the genre.

Taking the Next Step

If you’ve now become a fan of the idea of zombies, you’re probably ready to take the next step: Preparing for the zombie apocalypse. Now keeping in mind the idea of the undead rising up and taking over the earth is pure fantasy for all but the most hardcore zombie fans, you may not want to invest a lot of serious time in prepping specifically for the zombie apocalypse.

On the other hand, as you can see in the infographic attached here, much of the preparation you might do for a zombie apocalypse will apply to all sorts of natural disasters, such as a hurricane or outbreak of an illness. The folks running the Ready.gov web site don’t care exactly why you create an emergency kit, as long as you do. Some items to include in a kit include:

●     Clothing. Keeping warm is always tough in a disaster, so pack your kit with clothing you can wear in layers.
●     Documentation. Have your driver’s license with you in any emergency situation … even the zombie apocalypse.
●     First aid kits. Any emergency kit needs basic first-aid supplies, including clean bandages and anti-bacterial ointment, as well as personal prescriptions.
●     Food. Keep some non-perishable food in your kit, including packaged nuts, energy bars, and canned soup.
●     Radio. Remember that your cell phone may not work in an emergency situation, so a portable radio may be your only source of news.
●     Light and batteries. A small flashlight with extra batteries are both important items to have in an emergency kit.
●     Water and sanitation. Finding clean water will be challenging in a disaster situation, so keep some drinkable water, as well as some tablets or household bleach for purifying water, in your kit.

And if you want more information on specifically how to battle zombies, Max Brooks’ The Zombie Survival Guide is a great resource. It also is a fun read, keeping the idea of zombies fun and amusing. 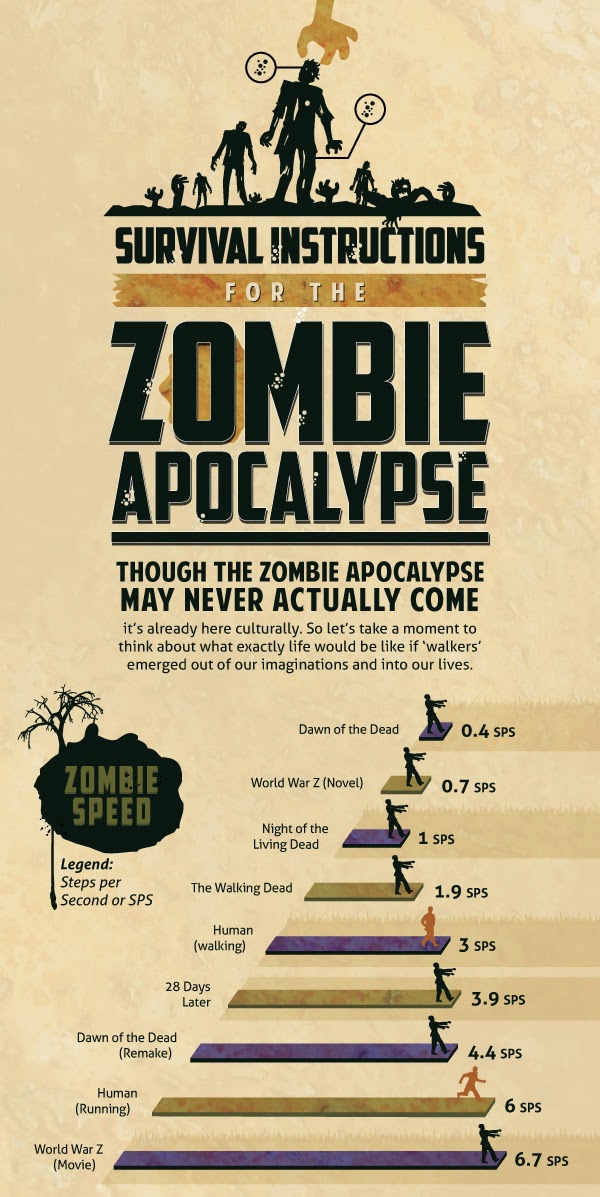 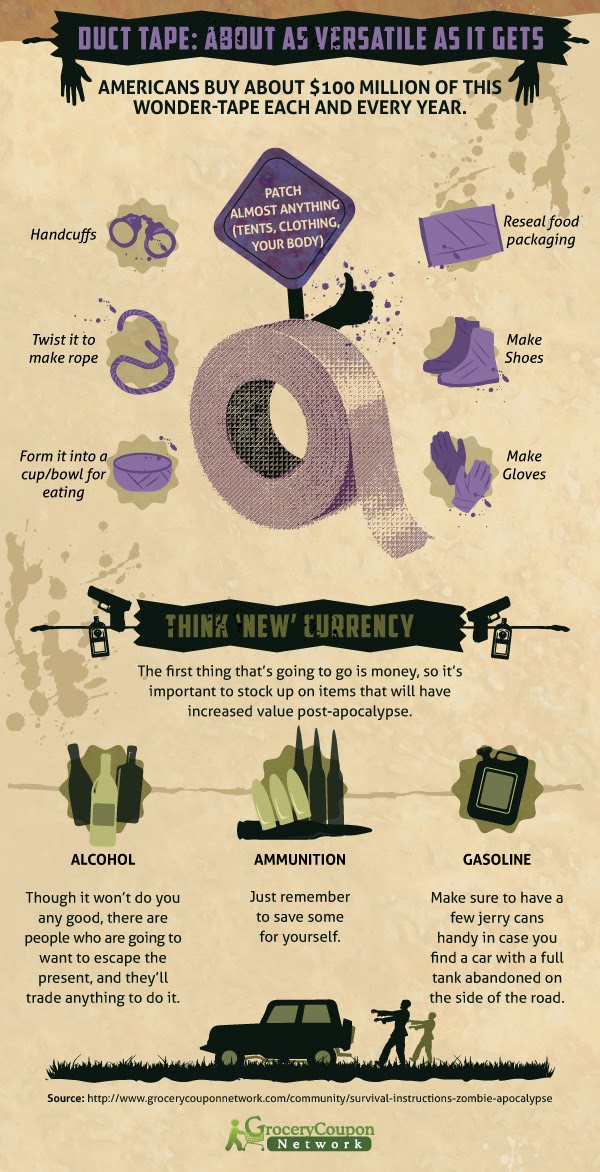 Naomi Shaw is a journalist and entrepreneur based in Southern California. She lives with her husband and three kids. She has done enough research to believe that, in the case of a zombie apocalypse, her family would fare very well. You can connect with Naomi on her Google Plus Page
Posted by Rick G at 7:46 PM