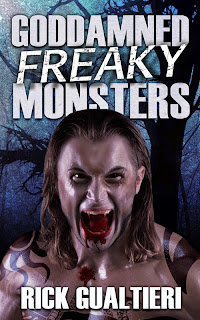 I am very pleased to present the cover, blurb, and first teaser for
Goddamned Freaky Monsters: The Tome of Bill, part 5

There are reasons we fear the night. Now he’s trying to stop them.

Three months have passed since the fateful encounter in New York City that ended with the disappearance of Bill Ryder - gamer, geek, and legendary vampire. Now he’s back - reawakened halfway across the globe with no allies, clothing, or clue as to how he got there. The only thing he’s certain of is that his captors plan to use him for their own nefarious ends and don’t care how much blood they spill in the process.

Escape might be the least of his worries, though. Civilization teeters on the brink of chaos. Mythical beasts, once thought the stuff of fantasy, are breaking through the veil, intent on waging war against mankind. At their forefront stands an ancient evil, the last remnant of a people thought long dead, and it’s about to cut a swath of destruction through the world not seen since biblical times.

Bill’s only chance is to reclaim his life, reconcile with his friends, and muster every bit of attitude he can - because if he fails, Hell on Earth will become far more than just a corny saying.


“Welcome to the chamber of seers, Freewill,” Alex said from beside me. “Here our elder prophets gaze out across the planes so as to divine the mysteries they hold.”

“Doesn’t look like they see much of anything to me.”

“In that you are quite mistaken.”

The couple across the way each flashed a set of fangs at us. Whoever they were, they didn’t seem all that pleased at our entrance.

They took a step toward us when a deep bass rumbled in the chamber as if someone had struck a massive gong somewhere.

The bearded seer immediately disengaged from the two he’d been huddled with and sat back in his place at the circle.

Alex’s hand fell upon my shoulder and he gently guided me back a step. The two others across from us likewise backed up, seemingly respectful in how they did so.

“Shhh,” Alex quietly shushed me. From his tone, I gathered it would probably be unwise to interrupt, especially since I was well within pummeling reach.

Silence returned to the room as the seated figures placed their hands upon the iron rods in front of them. Smoke rose from their skin where the hot metal touched. Ouch.

But that was nothing compared to what came next.

The bearded one muttered something unintelligible, at which point the rest answered in kind. They lifted the rods, ends glowing red hot, and proceeded to jam the near molten metal into their already ruined eye-sockets.

All eyes - and lack thereof - in the room immediately trained upon me. Uh oh.

The leader of the gouging cult raised a finger at me and screeched something that I couldn’t make out. Call me cynical, but I had a feeling it wasn’t “Hello.”

A moment later, he followed up with a compulsion to his buddies. His words were still indecipherable, but the meaning translated in my brain. “KILL THE BLASPHEMER!!”

Almost as one, the weirdos sitting around the pit plucked the burning rods from their skulls and stood, brandishing them as weapons. Great. Not only was I about to get my ass killed, but it was going to be with red-hot pokers coated in burnt eye-juice.

The couple that had been conversing with the elder whackjob stepped back, smirks on their faces. They’d come for the conversation, but were apparently staying for the floorshow. How wonderful.

Oh well, I might’ve been outnumbered, but they were just a bunch of blind nutjobs. I was debating how best to handle things when Alex stepped in front of me.

“Desino!” he commanded, whatever the fuck that meant. For all I knew, he was encouraging them.

I stepped to the side to get a better view of what they’d do, only to find their heads all turning to track me - definitely creepy. Just what I needed - a fight against a group of Daredevil wannabes.

Alex turned his head and directed his words at the couple who still stood there smirking like douche-nozzles. The woman threw a dirty look back his way in response, but nothing more.

The nearest of the eyeless monks was almost within reach to clonk me with his crowbar of doom when Alex said something else to the couple, a distinctly angry tone in his voice.

The woman let out a disgusted sigh, then she and her companion joined in shouting foreign phrases at the blind lynch mob. More words followed until, finally, the angry snarl left the old guy’s face and he held up a hand. His fellows immediately stopped in their tracks. Neat trick.

A moment later, the eyeless minions shuffled back to their spots around the circle. Phew! Before joining them, though, their leader turned toward me and bared his teeth - showing his gnarled fangs. He hissed in my direction, then spat on the floor.

I kept my mouth shut at the implied insult, not wanting to agitate the old fuck any further. I’d seen enough kung-fu movies to know that never turned out well.

I did, however, flip him the finger.

Alex stepped once more to stand at my side. “That is really not helping your situation, Freewill.”

“They’re the ones who overreacted.”

“Overreacted?” The woman's tone was one of outrage, but at least she spoke English. “You were the one fool enough to interrupt.”

“Sorry. I didn’t realize that there were rules to an eye-gouging circle jer...urk!”

She was across the room before I could finish the sentence, lifting me from the floor by the throat. Okay, perhaps I needed to rethink my attitude.

“He is an insolent lout. Need I remind you that we do not tolerate...”

“You need remind me of nothing. That is the Freewill you are holding. What I suggest is for your own benefit, not his.”

“This is the Freewill? Hah! He looks nothing like the magnificent beast your men captured.”

Magnificent beast? I would’ve replied to that, but my windpipe was currently being crushed...although considering my assailant’s appearance, I might’ve categorized it more as autoerotic asphyxiation

“Go right ahead and see for yourself, though I would caution you release him before doing so. He is more than your equal should you anger him.”

Well, that was a load of bullshit if ever I’d heard one. Right then, my best defense would have consisted of wheezing and passing out.

To my amazement, though, the angry hottie lowered me to the floor and let up on the pressure ever so slightly. “Very well, Alexander.” She turned to face me, eyes becoming as black as her dress. “ON YOUR KNEES!! LAP THE BOTTOM OF MY BOOT CLEAN LIKE THE DOG YOU ARE!!”

The compulsion felt like a good solid kick to the head. My eyes rolled back for a moment from the force of it. Whoever this chick might be, she wasn’t anyone to mess with. Even so, the most powerful of compulsions might be able to knock me on my ass, but they still did shit in the way of making me obey.

I meant to say something moderately respectful with regards to her inability to control me, but at the last second opted to be a bit more direct.

Cue evil laugh. I can't wait to get my hands on this book.

I begain reading the bigfoot hunters first and it was awesome, and decided to read bill the vampire and I never laugh so hard in my life, I'm super excited for the 5th book! XD

I'm so getting this book on the first day