Holier Than Thou (The Tome of Bill, Part 4) is now available 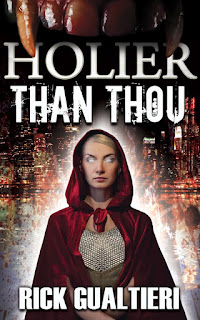 I am pleased to announce that 1) I'm still alive and this blog hasn't been abandoned and - oh yeah - 2) Holier Than Thou (the Tome of Bill, part 4) has been released! Woo!

Apologies for any delay in updating or posting here.  I have been absolutely swamped with projects, not the least of which has been trying to get this book ready for launch.  I hope to bring this blog back to at least a semi-regular posting schedule of inane thoughts and various other time wasters in the coming weeks.  But in the meantime...


There are reasons the undead fear the night...

Unsure of his allies and outnumbered by enemies, Bill must dig deep within himself and find the faith to succeed - because if he fails, it’ll be more than just his social life in tatters. 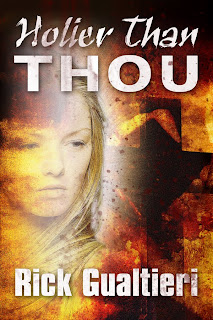 Holier Than Thou (the Tome of Bill, part 4) is 95k words of foul-mouthed undead insanity by Rick Gualtieri, author of Bill The Vampire, Scary Dead Things, and The Mourning Woods.

Coming soon to Paperback and Audio Book.
Posted by Rick G at 11:56 AM

you said "absolutely swamped with projects," i hope that what happen on book #4 please take your time on book#5.