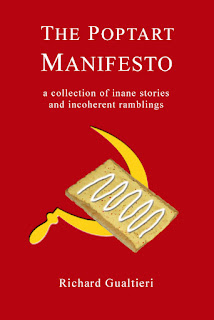 I normally don't give a lot of marketing love for my first book, The Poptart Manifesto. No real reason, other than I usually focus more on my full length stories. The Manifesto (after which this blog is named) is unique amongst my writings. For starters, it's a collection of short stories. Secondly, it's the closest I've come to non-fiction. With a few exceptions, most of the stories within The Poptart Manifesto, have a solid basis in reality. Sure, I've changed names and some facts to fit the story (and to keep myself from getting the beating I probably deserve :), but a good chunk of it actually happened to me. It's not a bad way to discover some of the (dorky) skeletons buried in the closet of my college-aged self.

Amongst those tales is this little narrative, the story for which the book itself is named. I figured I'd give it the spotlight this week...as well as put something up lest people forget I'm alive. Enjoy!


I love Saturday mornings. They make me feel like a kid again. Coming downstairs on a weekend is like reliving those moments from when I was ten and had no school, no commitments, hell no purpose at all waiting for me. I make it a point to celebrate those feelings by indulging in a few kidlike activities, not the least of which is to plop down in front of the TV for a few hours of mind-numbing cartoons...or at least some DVDs of cartoons as the TV networks seem to have come to the conclusion that the news is of far greater importance to the world than Super Friends and Bugs Bunny.

This particular Saturday, I came downstairs with my girlfriend of about a month, Rachel (after a night of non-kidlike activities), and proceeded, as I normally do, straight to the kitchen for my typical weekend breakfast. She followed and immediately began digging through the refrigerator for eggs, juice and other standard fare. Finding what she was after, she turned to see me pulling from the cabinets my weekend staple: a box of strawberry Pop-Tarts.

“That’s what you’re eating?” she asked.

“Yep. Strawberry Pop-Tarts and a glass of chocolate milk...mankind’s greatest achievement in the breakfast arts!”

“Are you seven?” was her reply.

“If I was, then that would make you a pedophile,” I quipped back giving her my best smirk.

She gave me a slight look of disgust and went back about her business. A pretty good response to my feast of choice, all things considered.

My last girlfriend had never stopped needling me about this little weekend fetish of mine. It was an annoyance, albeit a manageable one, and definitely a battle she wasn’t going to win. I had hoped she would finally come to an acceptance of sorts about it. Whether or not that would have come to pass, I don’t know. It never got that far.

What I do know is that, at some point she had apparently read one too many sensationalist news stories and developed this mad-on against all things containing high fructose corn syrup. One day we were happily sitting around drinking our Pepsi’s and eating whatever junk we pleased, and the next it was the devil’s sweetener and god forbid we eat one more bite lest we begin growing tumors out of our eyes. Never one to over-indulge in anything, I could have cared less. She could fool herself into thinking she’d live forever if she only stuffed herself with cane sugar, and I’d just go about my days as before. All was fine.

Unfortunately it wasn’t fine with her. Curse whoever invented the spare key! I came home one day to find she had tossed out all of my food containing the verboten HFCS and replaced it with, no-doubt, foul tasting all natural alternatives. In a panic, I threw open my cupboards and discovered that even my beloved strawberry tarts had not been spared her wrath. They had been cast away and in their place was a box labeled Organic Toaster Pastries.

“What the hell is this!?” I demanded of her.

“They’re all-natural. If you insist on eating crap, it might as well be healthy crap.”

“Healthy? What on earth could possibly make these things healthy? Are they genetically engineered in a secret lab? Do hippies lovingly bake them in ancient stone cairns? Are they free-range Pop-tarts?”

“Stop being a baby! Just try them. They taste just as good.”

My response to eating one was to compose this lovely Haiku to her:

Organic Pop-Tarts
I drink a gallon of bleach
Your taste is still here.

We broke up a short time later. Coincidence? Perhaps not.

Anyway, I was jostled from of my reverie just as I was about to take my first bite. It was Rachel and she sounded in a panic...well maybe panic is a bit strong of a word, but as near to panic as one can get from a strawberry filled breakfast pastry.

“Wait!” she said. “What are you doing? Aren’t you supposed to toast those first?”

“I have to do nothing of the sort!” I countered. “I like them cold.”

“Eww, they're no good cold. Why do you think that they're called POP-tarts? Because they're supposed to POP up out of the toaster nice and warm. Christ, even a three year old knows this.”

*sigh* Perhaps this wasn’t going to go as well as I had hoped.

“Don’t get me started,” I said, hoping that was the end of it.

“No seriously! You’re supposed to toast them”

“Listen,” I said, knowing that there was likely no stopping the rant that I could feel bursting up from within. “I know that Kellogg’s spends millions of dollars per year on an advertising campaign to make us think that we have to eat them hot. They’ve also tried to convince us that we should try them frozen, but I don’t see you bringing that up? Why? Because deep down you know it to be a blasphemy!”

“Blasphemy, I said! And if one of their campaigns is just a lie, doesn’t that make all of their others suspect too?”

“I hadn’t really thought of it.”, she answered, nonplussed.

“Of course not! Because THEY don’t want you to. But not I! I am a free thinker. I have long since wondered: if we were truly meant to eat our pop-tarts hot then wouldn't it just be simpler to make them toxic to eat cold? There are several foods out there that are downright lethal if not prepared properly. Try eating improperly prepared Fugu and see where it gets you.”

“Did you just compare eating pop-tarts to blowfish?”

“I’m trying to make a point here. A few random cold pop-tart related deaths and the world would surely abandon all thought of eating them right out of the package. Yet this is not the case. Upon much inner reflection regarding this conundrum, I think I have finally seen meaning to all of this.”

“Please, do tell. I can’t wait to hear this,” she added as she began to go about making her own breakfast.

Not even remotely fazed by her insolence, I continued, “What it essentially comes down to is the classic struggle between the haves and the have-nots. In this case, the conspiracy goes even further then the sad divide between those who have toasters and can afford the time to use them and those who cannot.”

“You don’t get it do you? What you see as just a cute commercial with cartoon pop-tarts frolicking about is, in fact, nothing of the sort. Kellogg’s is calling out to the Bourgeois society and telling them to show their superiority to the filthy huddled masses by eating their pop-tarts warm and laughing at us while they do so. They can do this because they know the working class is forced to endure the humiliation and scorn of eating their toaster pastries cold. They mock the lower classes by pretending to sell the same pop-tarts to both the rich and the poor. At the same time, however, they are creating further class segregation by knowing that your average nine-to-five Joe Sixpack doesn't have the time to plug in his toaster and enjoy the rapture of warm, semi melted, fruit filling.”

“There is a point you’re getting at here, right?” she interrupted, buttering some toast.

“The point is that you need to open your eyes to the bigger picture. This is but one more way that the wealthy scoff at the workers of the world. They sit there in their high rises, eating their toasted pop-tarts, which have no-doubt been cooked for them by their servants, knowing that they and they alone have the idle time to unlock and enjoy the hidden heat-sealed magic within. This they do whilst knowing the closest the working man shall ever come to knowing that magic is if his house catches fire and burns down in the morning. This is the hidden message which Kellogg’s seeks to deliver upon us.”

“I’m going to take my food into the other room. Let me know when you’re fin...”

“BUT THEY HAVE FAILED!!” I triumphantly yelled, jumping in front of her. “And why? Because we, the proletariat, have taken the poor, cold, untoasted pop-tart and made it into one of our symbols of strength. Indeed, some of us revel in the cool crunch of the frosting and take pride in the cold, damp chewiness of our fruit fillings.”

At that, I turned to the kitchen window and raise my arms high in triumph.

“So rejoice with me, my brothers and sisters!” I shouted as I once again turned to face her. “Hold aloft your Pop-tarts! Hold them high and heat them in the warm glow of FREEDOM!!!”

I was met with a polite golf clap and her response of, “And the point of all of this was again?”

“I like my pop-tarts cold. Except for the organic kind, that is. The wealthy can keep those too.”

“I didn’t say anything about organic Pop Tarts.”

“Perhaps not, but you would have. Trust me on this one.”


I hope you found some amusement from that, I know I did (especially at the time). Twelve other humorous stories like it await you in The Poptart Manifesto.
Posted by Rick G at 11:11 AM

Love it, Rick, thanks for doing this!
Aloha
Toby Neal

Now I'm craving strawberry poptarts. And I thought everyone knew that they tasted better cold?

I love chocolate milk, and having it with Pop Tarts makes it even better. I love your story.

I love poptarts, but they have to be cinnamon sugar ;)

I'm more of a s'mores poptart kind of guy.

Chocolate milk with strawberry poptarts is perhaps more awesome than words can describe.

My oldest likes the cinnamon sugar. It's gotta be fruit filing for me. :)

I've had that flavor. It does in a pinch, although I think Raspberry is my fav.

I like them cold, but I think I like them most hot. But you probably don't want to trust my judgement as to whether something should be heated before eating it. I eat raw pasta and raw oats (not together).