Since this will most likely be my last post before Christmas, I just want to wish all of my wonderful readers a Happy, Safe, and...possibly most important...Stress Free Holidays. I won’t say that this post is my holiday present to you all. I have something else in mind. Since I received such a positive response to my chili recipe a while back, I’ll be doing it again. What better than the gift of good food? Stay tuned, faithful reader, for my awesome Vodka Sauce recipe...coming soon!

Until then I leave you with some Sasquatch related mayhem. Enjoy! 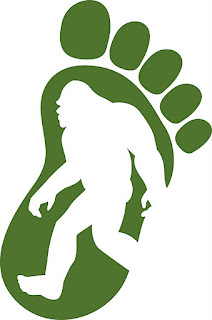 Since man first walked the earth, people have seen the unexplainable;
Lights in the sky, ghosts from the past, monsters in the mist.
Do they exist or are they just our imagination?
Science has scoffed at these stories...until now.
My name is Dr. Derek Jenner and I dare to believe.
Together with my team I will find what is out there waiting.
The truth cannot hide from me.
I am...the Crypto Hunter.

- Intro to The Crypto Hunter, Tues night 9:00 PM on the Adventure Channel

“Why can’t I turn on the light, Elmer?” Vera Gantry asked her husband for what, to him, felt like the hundredth time. The only illumination in their small cabin came from the living room fireplace. Elmer would have preferred it pitch dark, so as to make it look like nothing was alive in the place. However, their old oil furnace hadn’t kicked over for some reason. Elmer had made the concession to get a fire going, not being too keen on freezing his ass off while he kept a listen for whatever was screaming like banshee out in the woods.

“No lights! I already told you, woman.” he spat from his favorite chair. He had moved it to the center of the room, where he now sat, a double-barreled shotgun resting on his lap. It was loaded. Next to Elmer, on the tray table where he normally kept the TV remote, sat a full box of ammo.

“And I’m telling you you’re being a darn old fool.” she shot back. “No lights. No TV. Heck I can’t even see enough to knit. All for what? You probably just heard a wildcat yowling out back.”

“Weren’t no cat made that noise.” he said with grim finality. “Now pipe down, I’m listening. Can’t hear nothing with you chattering like a hen.”

She made a sound of disgust and got up from the couch where she had sat, complaining nonstop, since supper. Elmer breathed a quiet sigh. She was his third wife and by far his favorite. She could cook and she kept the house clean. However, once she got on a nagging kick the bitch just didn’t shut up. Elmer had never been a violent man. He believed that a sharp tongue lashing was always the better solution. Regardless, every so often he found himself wondering if maybe a good smack upside the head might be in order. Now was one of those times. His sharp ears didn’t mean didily while she was cawing like a bird.

She walked over to the closed shutters. “Well at least let me open the window a crack. It’s getting stuffy in here. If I have to be cooped up in the dark, I might as well be able to breath.”

He opened his mouth, meaning to tell her to sit back down and, for the last time, shut the hell up. However, in the split second between the end of her rant and his intake of breath he heard it. It wasn’t much, just the crunch of some dead leaves. However, he definitely heard something. Elmer Gantry’s ears were sharp. They had never failed him...until now.

“VERA! GET AWAY FROM...” The window exploded inward before he could finish.

The spray of wood and shattered glass caused his wife to back up a step but it wasn’t far enough. An arm, muscular and covered in brown hair, shot through the opening. Elmer’s eyes weren’t that good, especially in the dim light. He couldn’t see exactly what was standing outside the window except to tell that it was big. He didn’t need to, however. He already knew what it was.

Before he could steady the shotgun against his shoulder, the hand grasped the front of Vera’s dressed and hauled her towards the opening. She was dragged halfway out, her slippered feet kicking wildly in the air. In other circumstances it might have been comical, her legs flailing away while her dress rode up to show her bloomers. However, there was nothing funny about what happened next.

An animalistic snarl came from outside followed by a wet ripping noise. Vera’s feet suddenly stopped moving. They fell limp after one last twitch. A second later her lower half fell to the floor, the rest of her having been torn clean off. She hadn’t even had time to scream.

Elmer raised the gun. There would be time to mourn later. She had been a good woman and he would shed his fair share of tears at her passing. For now, though, there was business to attend to. However, even as he brought the gun to bear he could tell there was nothing standing at the window. Another soft crunch outside alerted him that it was moving. Still seated, he quickly pointed the shotgun towards the front door.

“Oh no you don’t, you sneaky son of a bitch!” he thought. The creature possessed impressive natural stealth for its size. It was moving quickly and quietly. However, it hadn’t counted on Elmer Gantry’s uncanny hearing.

He watched calmly while his front door was literally torn from its hinges as if it were made of nothing sturdier than issue paper. The creature stepped through with a snarl. Runny red eyes locked on first Elmer and then on the barrel of his gun. They opened wide as if in surprise, the last bit of sanity in its hairy head asserting itself at the very end.

Elmer unloaded with both barrels. Had he been standing, the recoil would have knocked him flat on his old ass. Either way he was going to have a nasty bruise on his shoulder. However, it more than did the job. The only thing left of the beast’s head was a fine red mist. The rest of it crumpled unceremoniously to the floor.

“That was for you, Vera.” he said to the empty room as the echoes from the blast died down.

He sat back in his chair with a sigh and closed his eyes.

With the door now wide open and Vera’s incessant prattling silenced, permanently, he began to understand. Roars, cries, grunts...all of them reached Elmer’s sharp ears. Soon enough, more of the creatures would come...many more. Had Elmer been a younger man he might have tried to make a stand. However, he was old. Old and suddenly very tired.

As he listened to the sounds of Bonanza Creek dying, he lit his pipe for one last smoke. He took several deep, satisfying drags and then grabbed some shells from the table beside him. He calmly reloaded his shotgun, his hands not shaking at all, moving as if he had all the time in the world.

He took one last puff from his pipe before setting it down. He kicked the loafer from his right foot, noting with some amusement that it landed on the body of the slain beast. “Kicked yer ass all the way to hell.” he thought with a grin.

Elmer Gantry placed the barrel of the loaded gun under his chin while he positioned his big toe on the trigger. His had been a good life. He found he had no regrets. If anything, the thought of seeing Vera again so soon gave him one last smile.

Another thunderous blast shook the house and then all was quiet...this time for good.

Some might have called it the coward’s way out while to others it would have been a good death. Regardless, Elmer Gantry checked out on his own terms. He was the only one in Bonanza Creek that night who could make such a claim.

You write so well. This makes me wonder what I would have done.

P.S. I LOVE the names you picked here. It set the perfect tone right from the beginning ;)

Many thanks, Elisa! In some ways it's a pity what happens to Elmer as, despite his small part in the book, I found myself fascinated with him. At the very least I felt I owed it to him to let him go out with some dignity.

As for what I would have done...I'd keep reloading and firing until I ran out of bullets. :)